My book SOUNDERS FC: AUTHENTIC MASTERPIECE  was published one year ago today, almost exactly a year after I first decided to write it. 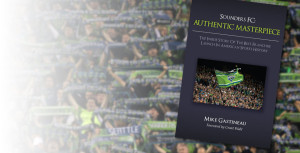 That sentence is a mouthful (much more for me than anyone else). The idea to do a book on the launch of the team hit me while I was walking back to my car on October 7th, 2012. The Sounders had just delivered a 3 nil thrashing of Portland in front of a packed house at Century Link Field. As I walked through Pioneer Square with thousands of happy fans my mind started swimming. I had always wanted to write a book and here was a great story sitting right in front of me. How in the world had the Sounders achieved so much success so quickly? I knew some of the answers and I knew the people who could help me with the things I didn’t know. I arrived home that night and told my wife that I was going to write a book on the launch of the Sounders. As I excitedly unwound for her the details that were flooding my mind I knew, I just knew, this was a good idea. I had decided to leave KJR about 3 weeks prior (a decision that was not public yet) and this would give me something on which to focus my attention.

I made some notes, a rough outline, and then set the project aside until I was finished at KJR. Shortly after the new year I began a series of what would become dozens of interviews encompassing hundreds of hours with people involved in the story. In February I traveled to Arizona and Florida for interviews with several key people. In Tucson I spoke with Adrian Hanauer for three hours while a snow storm raged outside our hotel. In Tampa, while waiting to interview former Sounders exec Tod Leiweke I watched a waterspout roar by my hotel.  I chose to ignore these apocalyptic signs from the sky and pressed on.

Most of the book was finished by August although I still had two gigantic holes to fill with comments from owners Joe Roth and Drew Carey. Those were the final two interviews I did. I spoke with Roth for about 90 minutes the day the team announced the Clint Dempsey signing in August and finally got an hour with Carey in late August. By September 10th the book was done and one month later the book was officially published.

It’s been a full year and while I admit this entire missive is a bit self serving today feels pretty awesome. We’re inching closer to 10,000 copies sold. (You can do YOUR part to help us get there by going here or here.)  My goal was a little higher than that but I’m heartened by the knowledge that something like 97% of all books written sell less than 1000 copies. I also recently learned that Hunter S. Thompson’s classic FEAR AND LOATHING IN LAS VEGAS sold less than 10,000 copies in its’ first year of publication.

Many people (fans and reviewers) have said many kind things about the book and I’ll admit that’s something that matters to me. I didn’t do this just to do it. I wanted people to buy the book and I wanted people to like the story. There’s only one negative review I’ve seen and that came from a Portland fan who felt the book (270 pages) was too long. Of course, for many denizens of Rip Village, anything over a half page pamphlet is going to test their concentration skills. 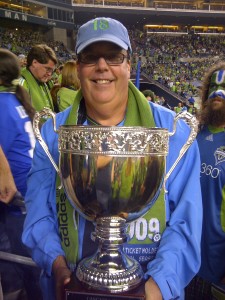 After numerous book store and bar appearances I’ve moved more into the corporate world in terms of promoting the book. Many successful things from the Sounders story can be applied to most businesses and I’ve got several events with companies set up for the fall and early winter to discuss it all. (If you’re interested in something like this by all means contact me- gas@gasman206.com.)

It’s been an amazing two years from the night I first decided to write the book, through the year of writing it, and now the year of marketing it. I’ve learned quite a bit and have great respect for any small business owner which is essentially what I became. After a few unsuccessful efforts to get someone in the publishing community interested in the book I opted to publish it myself through a terrific company called Create Space. I invested all the money necessary to get the book to market and then reaped any rewards that were there. I’ve told numerous people that I never, in all my life, worked harder to make money than I did in 2013. But I also never enjoyed anything more than I enjoyed writing and marketing this book. To all who have purchased the book and said kind things about it, unending pots of gold to your doorstep.

That seems quite enough for now. It’s almost time to work my way downtown and root for the Sounders to win back the Cascadia Cup. I held that trophy in my hands the night Seattle beat Portland in 2012, the night I decided to write the book. Tonight seems like an awesome night to bring it back home.