COACH JAMES IS NOT ALONE IN HIS LATEST FIGHT

COACH JAMES IS NOT ALONE IN HIS LATEST FIGHT

I was sitting in an ice cream shop with my wife and mother-in-law in Cincinnati when I first heard the news that Don James had resigned as head football coach at the University of Washington.

Difficult though it may be to fathom for some of you, all the way back in 1993 with no internet and no cell phones it was incredibly easy to unplug from your job. I was on vacation and hadn’t paid one second of attention to anything in the sports world. I found out about the story in a day old copy of the New York Times. I was stunned but if I had known the almost immediate ramifications the story would have for me I would have been whatever is past stunned.

I disagreed with Don’s decision but I also understood it. He knew that while UW had gotten careless and thus run afoul of NCAA and PAC 10 rules other schools had done far worse and received much less in penalties. The PAC 10 almost seemed proud of the fact that their penalties were tougher than the NCAA penalties (so tough in fact that the NCAA of all people told the PAC 10 to back down a bit).

I agreed with George Vescey of the New York Times who in sensational prose wrote (in the story I read in that ice cream shop) that, “the best revenge for Don James would have been to emerge from the Northwest mists, clanking his chains, howling in the wind, like some vengeful ghost right out of Shakespeare.”

Regardless of what talk show hosts, columnists, or anyone else thought Don James made his decision. The conference he had done so much for had overreacted to the point that the NCAA was put in the position of being the voice of reason. He felt his employer had not backed him during a difficult time. That combination led him to leave UW and it was a decision many people might well have made had they been in his shoes.

When I returned to Seattle a couple days later the story was still the hot topic on sports talk radio. Several of my colleagues at KJR at the time had labeled Don a “quitter” which I found humorously ironic. 99% of the radio personalities I’ve known in my career quit something the second it becomes difficult. Jobs. Relationships. Diets. A radio talk show host calling someone a “quitter” is akin to a bear calling someone hairy.

My first day back I met with my program director Tom Lee. Barry Ackerley owned KJR then and he had offered Coach James a regular one-hour weekly show. Don had accepted the offer but wanted me to be the co-host of the show. This surprised me because while I had met him a couple times and had interviewed him a few times I had no idea he even knew who I was.

To make the ad revenue numbers work for the show it would have to air in afternoon drive. I was doing a mid day show at the time but was told by my boss that I would be moving to afternoons (with a nice bump in pay) effective immediately. And each Monday for one hour I would visit with Don James.

That arrangement lasted for three football seasons and provides me now with some of my warmest memories of my time at KJR. Talking football with Don and having his wide network of friends and colleagues on the show was great. But it was something else that happened during that time that impacted me on a greater, personal level.

Before our first show Don had asked me if it was OK for his wife Carol to come with him. I told him it was fine by me. I had no idea that he meant Carol was going to come to every show and sit next to him while he and I talked. I also had no idea how fun that was going to be for me.

Carol and Don’s romance went all the way back to high school days in Ohio and their affection for each other was so obvious and genuine that you couldn’t help but feel better about yourself when you spent time with them. We had every big name coach at the time on the show and near the end of each interview Carol would scribble notes to Don reminding him to say hi to our guest’s wife and kids. She was delightful to chat with during the breaks and after a few weeks I made an obvious statement to Don that hanging around and talking to Carol was much more fun than hanging around and talking to him. 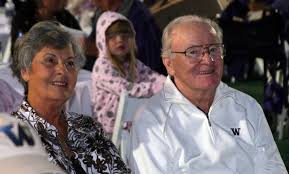 Carol also authored one of my favorite quotes of all time when someone asked her about Don’s new radio show and she said “now that he’s a member of the media I’ve decided there are certain days when I’m no longer speaking to him.” That quote ended up in Sports Illustrated.

My favorite story about Don and Carol from those days doesn’t involve the radio show. On May 22nd, 1995 my wife Renee and I went to see the M’s play Boston. The Mariners jumped out to 4 to 0 lead but the Bosox came roaring back and tied it in the 7th. It looked to my eyes like a classic finish but it was a finish I was going to miss. We were two of many who were hooked at that time by the TV show NYPD Blue and on this particular night, the season finale, Dennis Franz’s character Andy Sipowicz was getting married and we had to be home to see it.

I was grumbling as we left the Kingdome; angry at my own inability to put my foot down and demand to stay at this great game. As I got in the car I saw two shadows approaching and I said to my wife in mock bitterness, “Look at that poor guy. His wife made him leave the game, too.” I swung the car out of our parking space and our headlights hit the couple. It was Don and Carol.

“Hi Gasman,” he replied as he and Carol hurried by. “We’ve got to get home for the Sipowicz wedding.”

Don and I did 45 shows in three years and Carol was there for probably 40 of them. We (only half jokingly) referred to her as the show’s executive producer. Over time I began to realize why she wanted to be there. It certainly wasn’t a fascination with me or radio or the KJR crew (although an intern we had at the time, a kid named David Mahler, was always excited when the James gang arrived).

Carol sat with Don each week because they had already spent too many days and nights apart. Such is the lot of the wife of a coach. Carol had dutifully fulfilled that role to great success for Don’s entire 36-year career and now that he was no longer coaching she was going to spend as many hours as she could with him even if one of those hours each week was sitting in a dingy radio studio.

I don’t see Don and Carol nearly as often these days but when I do see them it always brightens my day. That they have had so much happiness in the post football-coaching phase of their marriage brings me great joy. I’m also comforted to know that as Don faces his tough medical fight his life-long love will be right there with him. I send my best wishes to them both.