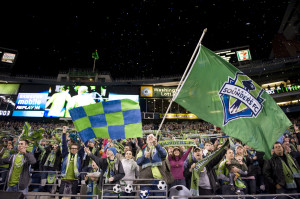 Mike Gastineau is uniquely qualified to discuss the Sounders and what they did to set themselves apart from other sports franchises. The Sounders FC story contains simple elements that are easily transferable to any business. Mike can discuss in detail the series of key decisions the Sounders made that put them in position to succeed as well as the attitude they brought to each one of those decisions that helped ensure success. His speech can be tailored to the needs of your business. He’ll combine insight into the Sounders way of doing things with humor, enthusiasm, and a natural ability to perform that will inspire and entertain your audience. 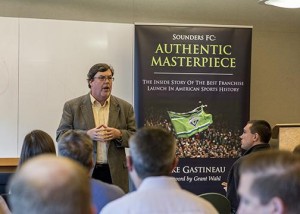 “Mike was great and I’ve had so much positive feedback on his presentation. A job well done.”

“Mike was fantastic. His ability to tie the key factors of the Sounders incredible franchise launch to the issues that business face today was relevant and engaging. He connected with and captured the minds and hearts of our sales team and customer service department. His passion for the story and ability to make the necessary connections with our business and customers made this a huge win. As exciting as a goal in extra-time, Mike is a must have on the list of speakers.”

“Mike’s talk was informative, enthusiastic, and engaging. The book might appear to be about soccer, but really it is a book from which any company introducing new products will glean great insight.  I am using several of the ideas for my winery!”

“Mike came in and spoke to our leadership team in Seattle.  He did a great job providing a behind-the-scenes-look with energy, insight and the right amount of humor.  I would recommend.”

“Mike delivered a great talk to the Puget Sound Business Travel Association at our annual meeting. His high energy presentation entertained and informed our crowd. Excellent!” 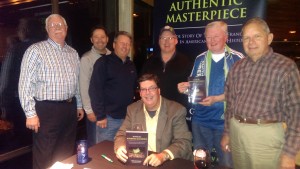 As part of his appearance, Mike will make books available for purchase either in bulk to your company or individually to attendees.  He’ll sign and personalize each book and will spend   time after his talk answering questions.

To discuss rates and for more information contact Mike at: