In excerpt three, Purzycki finds out that life on the road for the first-ever white head football coach at a Historically Black College and Univeristy is going to present challenges. (ICYMI, excerpt one is right here, and excerpt two is here.

Rookie college head football coach Joe Purzycki walked onto the field at State College Stadium in Orangeburg, South Carolina, and headed for the Delaware State sideline. It was about an hour until kickoff and the Hornets were stretching and warming up for their game against South Carolina State University.

The Hornets were 0 and 1 after a loss to Virginia State. That game was a road game but close enough to Dover that the Hornets traveled and played on the same day. Game two at South Carolina State was almost 600 miles away. Purzycki checked itineraries from his days at Delaware to see how the Blue Hens handled similar trips, and then he spoke to Townsend.

“I want the team to leave Thursday morning,” he told the AD. “We’ll bus to Orangeburg, check into the hotel Thursday night, practice Friday, play Saturday, then come home.”

Townsend smiled and told Purzycki that he and the team could leave on Thursday, but not until almost midnight. “That way,” he said, “the players can sleep overnight on the bus, which saves us money. You’ll get there on Friday at noon, have your practice, then check into the hotel.” It was another reminder to the coach that he wasn’t at Delaware anymore. Delaware State’s team bus was an old, past-its-prime coach that the players had long ago nicknamed the “Gray Ghost.”

“It had a bathroom,” defensive lineman Thunder Thornton related, “but there was nothing about it that was luxurious.”

Thursday night came and Purzycki was impressed that his players, particularly the veterans, arrived at the bus well before the planned departure time. He wanted his team to be on time, which (like most coaches) meant early. If the upperclassmen on the squad were buying into this idea, he was making progress.

He soon realized that their prompt arrival wasn’t an effort to please the new coach.

“The guys who had made this kind of trip before got on the bus as soon as it arrived and started jumping onto the luggage racks above the seats,” he laughed. “They weren’t trying to impress me, they just wanted to get the best spots for sleeping on an overnight bus trip.”

When the luggage racks filled up, players claimed spots in the aisle. The last to arrive (along with the coaching staff) would sleep sitting up. Nocturnal travel wasn’t unique to Delaware State. Most HBCU football teams made similar arrangements for lengthy trips. Limited budgets meant limited accommodations. 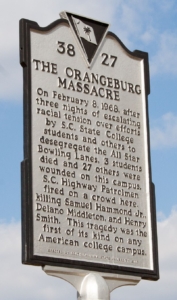 It had been tough for Purzycki to get a foothold in Dover but at least he was there every day and could sense some progress. Road games were a different story. Townsend had warned him that he’d likely face some antagonism from players, coaches, and fans of other teams who felt his hiring as a slap in the face. Townsend wanted Purzycki to be aware of what he was walking into, and in the case of Orangeburg, that was a college town with deep racial scars.

On February 8, 1968, South Carolina State University was the site of a rally protesting segregation. As tensions escalated between students and police, a policeman fired his gun into the air, apparently attempting to restore order. Other officers upon hearing the shot, fired into the crowd. Three students, all teenagers, were killed, and 27 were wounded. An investigation concluded that most of the wounded were shot in the back as they fled.

In the wake of the shootings, nine officers were brought to trial. All nine were acquitted. Thirteen years after the “Orangeburg Massacre” many people in the SCSU community remained resentful, and a high level of mistrust persisted. This was a place with especially jagged emotions, and the very idea that a black college football team was being coached by a white man remained troublesome.

“You’re heading into the old south,” Townsend told him. “It’s still segregated and if there’s anywhere you’re going to face difficulties, this might be the place.”

Purzycki already knew how SCSU coach Bill Davis felt. At the pre-season MEAC coaches meeting, Davis had been among those who refused to speak to him. He let others know that he hated the idea of Purzycki being the head coach at Del State. (On this day he would forego the traditional pregame meeting between head coaches as well.)

Purzycki let his assistants handle stretching and warmups. As they walked through the lines of players, giving encouragement and reminders, he took a seat on the Hornets’ bench to go over his notes and focus on what he was going to say to his team before kickoff.

They faced a tall task. South Carolina State was coming off a 10-and-1 season and this game would be the Bulldogs’ 1981 home opener. They were a true HBCU dynasty. Few schools their size had produced one Pro Football Hall of Famer, but SCSU had three: Harry Carson, Deacon Jones, and Marion Motley. The place dripped with football success and history.

The Bulldogs were favored to win the MEAC and would likely have no trouble with Del State and their new coach. As Purzycki sat on the bench, one of the South Carolina State assistant coaches made his way over to the Del State sideline. Just within earshot of Purzycki, he began talking.

“Look at this, fellas.” he addressed his players. “The white man is over here sitting down while the black man is working.”

“He was a big defensive line coach and he was just jaw-jacking, trying to intimidate us,” said Del State secondary coach Greg McLaurin.

It took Purzycki a moment to process what he had heard. In case he missed it, the coach repeated himself. “White man sitting while the black man is working,” he said coldly. “Some things never change.”

Purzycki definitely heard him the second time and instinctively jumped off the bench to find something to do. McLaurin intervened. “Hey!” he yelled at the SCSU coach. “We don’t need any of that kind of talk. Knock it off! Get away from our sideline.”

“Oh, sorry,” the coach responded. “What’s the massuh got you doing today?” McLaurin and the coach verbally sparred for another minute (“I was giving him just as much back as I was getting.”) 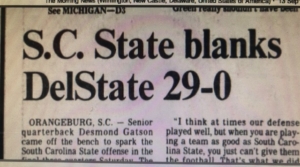 before the SCSU assistant retreated, pleased that he’d struck a nerve.

On the long trip home from the game, his second loss in as many games, Purzycki recalled Townsend’s statement during their very first meeting about the black college football community: “There are people who are not going to be happy with a white man taking a leadership position at Delaware State College.”

For months, Purzycki told everyone who asked that he just wanted to be a football coach. But it was finally sinking in that he was more than that. He was, as one sportswriter described him, “a social experiment.”