But first…in the fine tradition of a veteran radio man…a word from our sponsor.

The book will be available on or around October 25th. But if you’d like to get a copy of it before then you can attend my book launch party. It’s Tuesday night, October 22nd at the Market Arms in Ballard. My goal with this party is to raise a little money to help pay for the first printing of the book. I’m self publishing the book which means I’m self marketing and to a certain extent self distributing. Tickets for the party are $40. Attendees will:

-get the book two or three days before it’s available (be the FIRST on your block!)

-get the book signed and personalized by me

This party is being emceed by the voice of the Sounders Ross Fletcher and is a terrific way to kick off a week long build up to the regular season finale against the LA Galaxy. I hope to see you there. Here’s ticket info:

And now…back to the show. Here’s the cover for the book (the subtitle has already created a little grumbling from Chicago and RSL fans but I think once people read the book the case will be made pretty thoroughly). 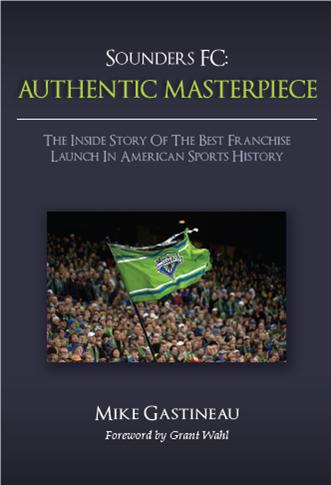 For the first excerpt I’ve chosen a section about Brian Schmetzer. With his direct link to the NASL Sounders Schmetz represents a critical part of this story. He also played for the Sounders when they came back in 1994 and coached the team to two championships in the USL. You could argue that he could nicely wear the moniker “Mr. Sounder”. Given his resume he would have been a natural choice for head coach of the MLS version of the club. Here’s why it didn’t bother him that he didn’t get the job.

“Welcome to the NASL, son!”

Schmid’s hiring left some fans feeling a little hollow. He had just won the league championship in Columbus so there was no denying his credentials. But some fans grumbled a bit that the job should have gone to the USL Sounders coach Brian Schmetzer. Why shouldn’t he get a chance to show what he could do in the big league?

What those fans knew about Schmetzer was that he had coached the Sounders to two USL championships and a third title-game appearance in his seven-year run as head coach. Obviously he knew what he was doing. When his roots as a player in the old NASL Sounders were factored in it was natural for fans to assume he might be named coach of the MLS team. Not unreasonably they cited a sense of fair play in beating the drum (mostly in internet chat rooms) on behalf of Schmetzer.

When he didn’t get the job, it might also have been natural for Schmetzer to burn a little. But he wasn’t upset, at least in part due to a conversation he’d had four years earlier.

In January of 2004 Schmetzer attended the MLS player combine in Los Angeles. He had two years under his belt and although his first two Sounders teams won the division he was smart enough to know that there was a lot he didn’t know about being a head coach. So he decided to see if he could get some help from a guy who had a reputation as a very good coach, then-LA Galaxy head coach Sigi Schmid.

“I called Sigi up out of the blue and introduced myself and asked him if we could meet. He agreed to have coffee with me. I brought my notepad and we sat for 90 minutes.” The kindness of the gesture was not lost on Schmetzer. “He went out of his way to help a USL coach figure things out.”

Partially because of that meeting, and because of honest self-assessment, Schmetzer was fine with how things worked out. “There’s no question I would have done a good job, but my experience level with the league and how it operates, I was underqualified for that side of the business. I could have handled the on-field stuff. But the contacts, how the league operates, the cap, Sigi has such a good memory for all that stuff and that information was vital for us to have success.”

So in the battle to get a leg up on other expansion teams the Sounders had a built-in advantage: Their new coach already had a positive vibe with his top two lieutenants. His decades-long relationship with Chris Henderson was a huge plus, and Schmetzer’s endorsement would help give him credibility with skeptical fans. Those fans knew Schmetzer’s Seattle soccer stripes had been earned.

BRIAN SCHMETZER WAS attempting to look like he belonged, but that’s a tough act to pull off when you’re flat on your back and people are laughing at you.

Like most 17 year olds, he was young, full of optimism, with an unlimited future. In his case the future was right in front of him because he had gotten a job. Not just any job: He was a professional soccer player, signing with the Seattle Sounders of the NASL right after he had graduated from Seattle’s Nathan Hale High School.

Schmetzer’s first training session with the team was in the Kingdome in June of 1980 and he recalls it being a pretty big deal. The team had signed another Seattle kid, a friend of Schmetzer’s named Fred Hamel. “I remember the local media were all there,” Schmetzer says. “The Sounders have signed two local lads and everyone’s out to watch them train.”

Just weeks earlier, Schmetzer had been trying to get a date for the senior prom. Now he was playing professional soccer in America’s top league. Schmetzer says at one point during that first training session he got the ball off a pass, when all of a sudden, “I went flying up in the air and landed on my back.”

Momentarily winded and a little embarrassed Schmetzer looked up at the lights that formed a ring around the roof. Suddenly those lights were blotted out by the teammate who had sent Schmetzer ass over teakettle. “I looked up and (Sounders center back) Bruce Rioch was standing over me,” he recalls. Rioch was nearly twice Schmetzer’s age and had logged significantly more miles than the teammate he had just tackled. Coincidentally, when Rioch signed his first pro contract he, too, was 17 (when Schmetzer had yet to celebrate his second birthday).

Everyone else at the session was laughing and Schmetzer laughs now as he remembers Rioch in his English accent saying, “Welcome to the NASL, son!”

This was his on-field welcome to pro soccer. His off-field welcome had taken place just days before when he agreed to terms with the club on a contract … a contract he didn’t sign. “My dad had to sign the contract with me because I was still a minor,” he says. “I remember on the drive home he told me, ‘You’re very lucky to play soccer for a living.’”

Walter Schmetzer wasn’t just some dad throwing out random fatherly advice. He had played Third Division soccer in his native Germany before moving to Seattle in 1962. Brian Schmetzer was on the trip, technically, but he doesn’t remember anything about it. “My mom was pregnant on the airplane coming over to America,” he says. “I was made in Germany but born in the U.S., so I get the best of both worlds.”

Schmetzer recalls growing up in a house where soccer was huge. “My dad was pretty passionate about it,” Schmetzer says. Passionate enough to help organize a trip for Brian and his teammates to play in a youth tournament that coincided with the 1974 World Cup in Germany. “Our little soccer team had collected glass for four years and recycled it and we raised $12,000 to go to Germany. My dad still had all his family over there.” Schmetzer’s team played 10 games against German teams and got at least one taste of World Cup passion.

“The most vivid memory I have is, we were kicking the ball around out in the street and all of a sudden this guy opens his window and throws his TV out the window. We’re 12 years old and we’re all like ‘what the hell just happened?’ The guy is screaming. We find out later East Germany had beaten West Germany, 1-nil.”

It was also about this time that the NASL Sounders arrived in Seattle, and like other kids, Schmetzer was caught up in the excitement the new team created. He followed the Sounders, and remembers pursuing player autographs at the postgame parties the team held at Seattle Center. Six years later, Schmetzer was playing in the NASL. The contract his dad signed for him didn’t pay much … unless you were 17. “We were getting paid $750 bucks a month, which at the time to me was a fortune. I’m thinking this is the greatest thing ever. I’m thinking I got life pretty good. Then in 1981 the league set a minimum wage scale for players, so my pay jumped to $2,200 a month, so now I’m living high on the hog.” 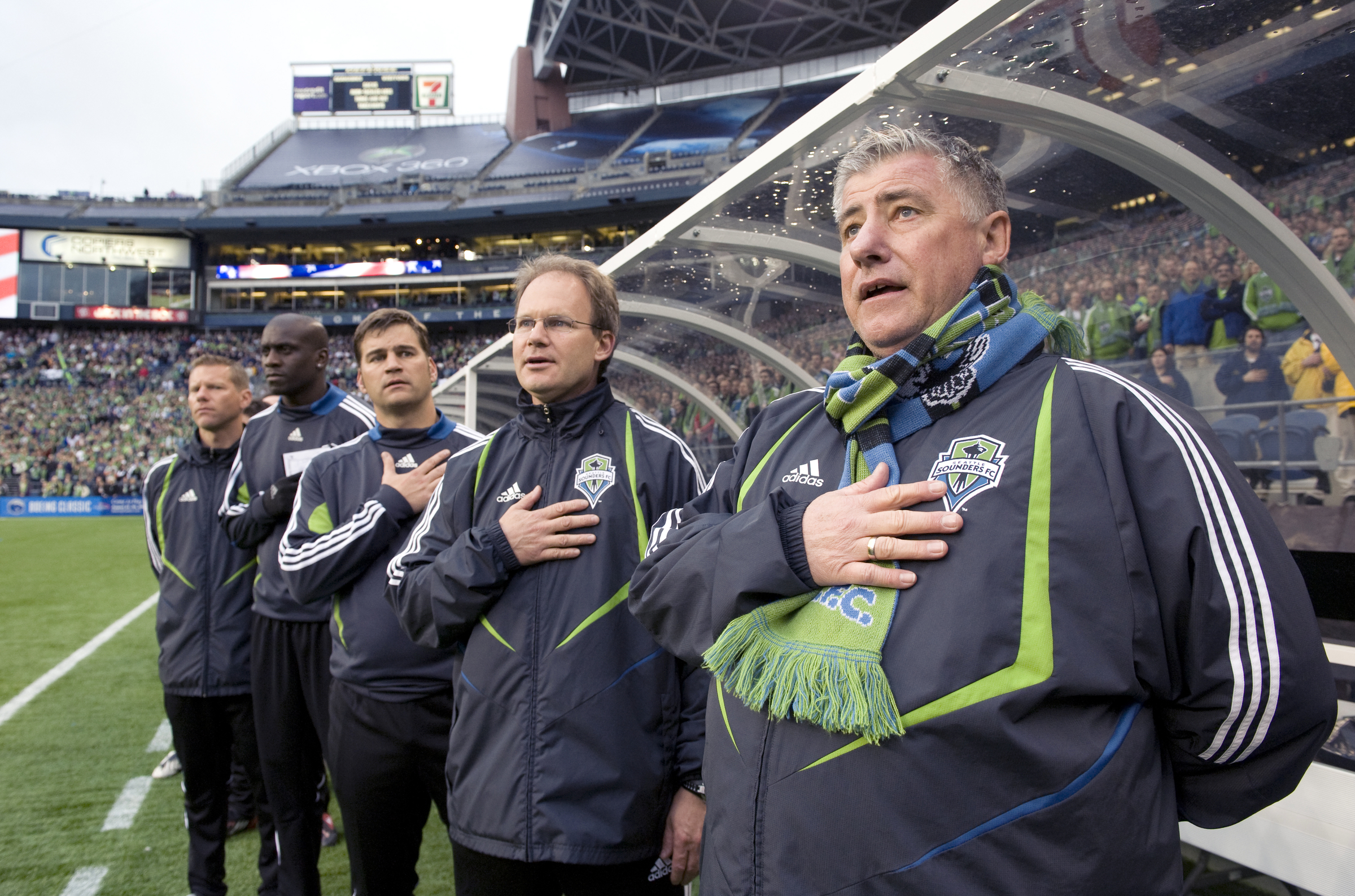 Brian Schmetzer standing next to Sigi Schmid during the national anthem before the Sounders first game in MLS. (photo by Rod Mar)

I’ll post more excerpts from the book between now and the launch party date.