Recently, it was hypothesized by a guy who is missing basketball (me) that when we get the all-clear to resume activity the NBA should consider a one and done style bracket tournament to reignite basketball passion in this weird year. You can get details on this idea right here or here.

To figure out what might happen in such a tournament I’ve engaged the help of my friend Rick Turner who is currently the head coach of the Jamaican National Basketball team. In addition to coaching the game, Rick is a lifelong fan. His hoops bona fides were permanently sealed when he had Kevin Calabro do one of the readings at his wedding. Swish.

Coach Turner has taken time to sketch out game summaries and predictions for our enjoyment. Remember, by virtue of their records, the Bucks and Lakers get a bye in the first round. The other 28 teams were matched up and will play for the remaining slots in the sweet 16 (which will be reseeded). Here are the first seven match-ups in the first round. You can follow Coach Turner on Twitter right here and on Facebook here. In the spirit of killing time, I’m sure he’d love to virtually debate the virtual results of virtual basketball games with you. Every word below is his except photo captions. 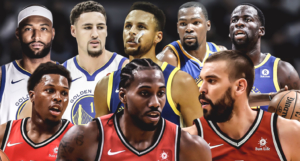 Some of the faces have changed, but the first round offers a rematch of the 2019 Finals.

Raptor fans must be wondering whose bright idea this whole NBA Cup thing was, after learning that their first-round match-up is with their opponents from last year’s NBA Finals, the vaunted (yes, I said vaunted – this a cliché friendly space) Warriors. In fact, the battle-tested Dubs have found themselves in The Association’s June Classic for five straight years. But that Warriors team has a couple decent guys who find themselves absent for the ’19-’20 version as well as this rematch.

The names Kevin Durant and Klay Thompson have been replaced by much less intimidating names like Andrew Wiggins and Damion Lee and even though the defending NBA champion Raptors no longer have ’19 Finals MVP Kawhi Leonard to lean on, Nick Nurse’s guys never seemed to skip a beat over their shortened 64 game season – going 46-18 – matching last year’s record after the same amount of games.

How do they do it?

The return of Steph Curry keeps the once proud Warriors around for much of this, but in the end, playing at home, playoff tested just a year ago and just flat better – the Raptors close this one out for Canada’s patient zero, Margaret Trudeau, and move on to the round of 16. 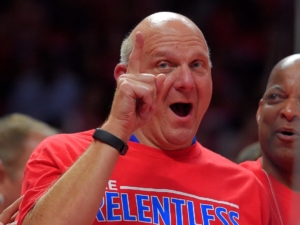 No one was happier to see the idea of the NBA Cup become a reality than Steve Ballmer. Better put, maybe no one was happier to see it than Steve Ballmer’s family who are finally liberated from having him stuck in the house all day freaking out about what a great job the dishwater did on their sauce-stained Calphalon cookware or fist-pumping on how fresh his clothes smell coming out of the dryer.

With the Lakers getting a bye in the first round of the tournament, all eyes in Hollywood are on Doc and the Clips as they embark on what they hope ends up being the first trophy raising ceremony in the franchise’s history. But in all reality, this game is just a glorified bye for LA’s Other Team.

The good news for the Cavs is that Khloe and True will be in attendance to see daddy Tristan plod up and down the court – but it pretty much starts and ends there – as this is a terrible match-up for former Sonics ball boy JB Bickerstaff in his first meaningful game as Cleveland’s head coach.

The Clips dealt Cleveland their worst home loss in franchise history in February and did it without Kawhi Leonard. All Kawhi did in the two teams’ first match-up back in January was hang 45 points on the lowly Ohioans.

This Cavs team is more reminiscent of the Ronny Brewer, Mike Mitchell and Kenny Carr teams of the early-80’s than anything resembling their recent success in the King James Era (pre and post his talent taking side trip to South Beach.

This one is all-Clippers and is over before Ballmer can even break a sweat.

The first and only meeting between these two teams this year was back on February 21, as the C’s got a ten-point road win. The T-Wolves were forced to go small without Karl-Anthony Towns (who’s Dominican btw) and just couldn’t handle Boston’s fifth-wheel, Daniel Theis (who?) who had a career high 25 points and 16 rebounds on 9-14 shooting and pounded the Wolves in what they now call “the restricted area” or what you and I know as “the paint”.

Minnesota’s hopes will definitely be buoyed if Towns can avoid wrist surgery and find a way to play in this one, but without the former Kentucky one-and-doner, the T-Wolves are gonna need a lot of help.

God bless the Mayo Clinic and all the fantastic Minnesotans but this one goes to all the folks at Mass General and the star power in Boston. 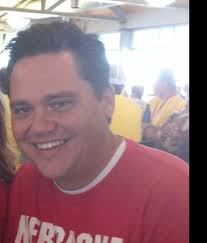 ed note: Jason Kosmicki worked w/me in Nebraska last century. He is the voice of the Nuggets.

Two teams that split wins on each other’s home court this year meet in the first round of the NBA Cup and both have multiple guys who can single-handedly impact the outcome of the game.

Steph Curry 2.0 (Trae Young) had 42 in the Hawks win in the Mile High City back in November, but Nikola Jokic answered with a 47-point performance of his own in early January when the Nugs went to the ATL.

The question for longtime NBA fans will be if Vince Carter decides to give the NBA Cup one final career hurrah and better yet if he can somehow resurrect his 50-point (9- 3’s) performance from back in 2001? If he can, Atlanta might have a chance but otherwise a Denver team who thinks they might be able to win this whole thing won’t let the young Mr. Young get loose. There’s no way I’m picking against the Jamaican roots of Jamal Murray. Denver in a laugher. 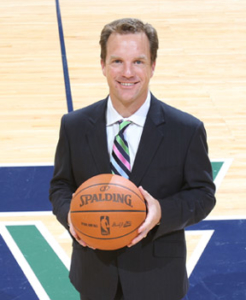 Another old broadcast friend. David Locke is the voice of the Jazz. His recaps of these games would be War and Peace length.

Okay… so it’s not Zeke Thomas and Bill Laimbeer vs Stockton and Malone. The Bruce Brown/ Christian Wood vs Mike Conley/Bojan Bagdonovic matchup isn’t screaming to get the Marv Albert/Matty Guokas Game of the Week status. But Donovan Mitchell is a ton of fun to watch and despite his clownish rep at this point, Rudy Gobert is a true defensive presence.

Hard for me to root against either of these two excellent head coaches with great Seattle ties, but only one of these teams was trending in the right direction when things came to a screeching halt.

Both teams are good defensive teams, the difference here is Utah’s efficiency on offense. Lots of weapons for the Jazz, an ability to shoot the three, to score inside, a variety of two-man matchup problems spells a quick exit for Coach Casey in the 2020 NBA Cup.

The Knicks have been a circus now for quite some time and when they’re not not letting other teams score they are also not not not scoring themselves. Side note: when I’m not setting records for quintuple-negative sentences (breaking Channing Tatum’s record in 21 Jump Street when he said, “You never won’t know what you can’t do until you don’t try”), I’m actually rooting for RJ Barrett to have a fantastic career because he has Jamaican grandparents.

Julius Randle is dangerous but so far in the Big Apple, they haven’t found a way for it to fit together as of yet. RJ will be okay but otherwise there just isn’t a lot here.

Pat Riley told Spike Lee he could use any entrance he wanted at American Airlines Arena for this one and I wouldn’t be surprised if Spike showed up repping his Keith Askins #2 Heat drip.

Next up. Seven more first round games: Zombie Sonics vs Bulls, Rockets vs Hornets, Mavericks vs Wizards, Pacers vs Suns, Sixers vs Spurs, Kings vs Griz, Pelicans vs Nets, and Magic vs Blazers.  Results posted tomorrow.