“You can expect to see a lot of new faces on next year’s team. A lot of important contracts are coming up for renewal and you can bet that the guys will be asking for more than management is willing to pay.”

Wednesday’s announcement that Golden Tate was leaving Seattle to join the Detroit Lions provoked the kind of immediate and visceral reaction one would expect from some Seahawks fans still giddy at the notion of their team being the defending Super Bowl champions and still hungry for more Lombardi Trophies.

Social media was quickly flooded with angry comments from fans who felt betrayed by Tate’s decision. Many fans mentioned “loyalty” (although only in the context of Tate, not in the context of the team’s decision to release Chris Clemons) and wondered how it’s possible for a man to say one thing on February 4th (Tate’s proclamation that he’d consider taking a home town discount deal to stay in Seattle) and then do something completely different on March 12th.

Understandably, most people have trouble wrapping their minds around the kind of money being discussed here and that just adds to the confusion. Even more pertinent to the mindset of those being critical of Tate is the fact that very few people work in a job where you have a decade (or often less) to earn your money and you’ve got just a few points along the way where you may be able to drastically accelerate that money. 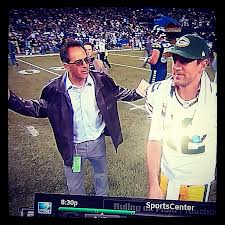 Among many great memories Tate created was the “fail mary” which elicted Mike Silver’s infamous “WTF?” comment to Aaron Rodgers.

To be clear, that’s what we’re talking about today. A drastic acceleration of Golden Tate’s net worth, an occurrence that in theory took less than a minute to happen. To understand Tate’s decision, put yourself in his shoes. Forget any so called “loyalty” or what was said a month ago or what you THINK might happen. Here’s the decision Tate was faced with in Motown.

By saying yes to the Lions he was immediately given 22 times what he earned last year in Seattle. Guaranteed money. His to keep no matter what happens. 22 times his salary wired immediately into his bank account and there for any use he sees fit. MAYBE he could have gotten a similar guarantee from Seattle (it seems unlikely) and MAYBE another team might have offered more if he had turned Detroit down but put yourself in his shoes and ask yourself honestly what you would do if someone offered you 22 times your current salary simply to sign a piece of paper and switch companies.

That’s yours to keep. There’s even more once you start working for you new company. Approximately six times what you’re making right now, per year, for five consecutive years. So again…if you make $40,000…and you were in Tate’s shoes…a competing company has offered you $880,000 guaranteed money and another $240,000 per year for the next five years.

Now factor in this: the company is hot boxing you. They’ve got you in an office and they are trying to close the deal. The most effective way to do that is to do what the Lions almost certainly did which is to put the offer on the table and indicate that it expires if you decide to leave the room.

Faced with those numbers it’s difficult to conceive Tate (or anyone else) would say…”wellll, I DID say I might take a discount to stay in Seattle so I better say ‘no’ to your rather remarkable offer.” It’s not realistic for anyone willing to put emotion aside and deal in common sense.

From a football sense it’s easy to see why Tate’s departure makes Seattle fans nervous. He was a very good receiver and a very good punt returner and that means you either have to find another such hybrid or replace him with two guys. From that standpoint it’s a tough blow and maybe that’s where some of the angst and anger is coming from.

But don’t begrudge Tate for doing what most people (at least those being honest with themselves) in his shoes would have done. It’s an unfair thing to turn him into a villain after all the great memories he leaves us.

By the way…that quote at the top of the story is  from former Miami Dolphins linebacker Doug Swift. He said it to Hunter S. Thompson in the lobby of a hotel in Houston the morning after the Dolphins had just won their second consecutive Super Bowl in January of 1974.