On an afternoon in Detroit in 2006 my producer Matt Muller and I were walking around the media center at Super Bowl XL when a security guard suddenly jumped in front of us and ordered us to halt. We could see and hear a great commotion as some star was making his way into the area. I remember saying to Matt “this must be someone big” because there was a large phalanx surrounding the guy. When the group moved closer to us we both started giggling.

The guy who necessitated this massive show of force was then Philadelphia Eagles quarterback Donovan McNabb. The idea that McNabb, at the Super Bowl media center, needed a dozen people to escort him around was absurd. The one sure way to draw attention to yourself is to have a huge posse surrounding you and security guards stopping traffic so you can safely pass. (McNabb WAS coming off his only Super Bowl appearance and I’d been in Las Vegas the year before and lost money on him and the Eagles so maybe it was good I was being kept at arm’s length.) Regardless, someone (maybe him, maybe the NFL) determined he needed a little extra security. He’s hardly alone in this behavior. Lots of athletes and celebrities feel more comfortable in these situations with a little support and certainly no one is hurt by that. 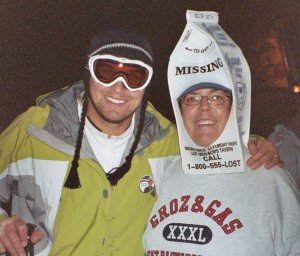 At Grant Wistrom’s Halloween party at Century Link field in 2004.

A little later we were sitting at our table doing our broadcast back to Seattle on KJR and for the second time that day the sight of an NFL quarterback made me laugh. This time the guy in question was going to be starting for Seattle on Sunday. As he walked through the media center making his way over to us to spend some time on our show I was laughing because his “escort” consisted of one guy from the Seahawks media staff and despite the lack of security he wasn’t stopped by anyone for anything. It hit me at the time that most people didn’t even recognize him. Such was the every man quality of Matt Hasselbeck who retired from the NFL today.

I remember teasing him during the interview that if he were to lead the Seahawks to a win in the Super Bowl his days of walking into an NFL media center without being bothered were probably over. He and I both knew I was wrong about that. Regardless of what happened to Matt Hasselbeck on the field he was going to remain the same unassuming person off the field and carry himself with the quiet cool and confidence that comes with a person who is always comfortable in his own skin.

If there’s a Seattle media person with a negative opinion or story about Hasselbeck I never heard it. He was unique in that aspect, a huge star who seemed to always have time for people and never interacted with them in a negative way. I can’t think of one other guy I covered in 22 years at KJR who pulled that off. The simple fact that media and athletes often interact in difficult or adversarial situations leads to even the best guys with the best intentions (on both sides of the equation) having bad days or bad moments. But not Hasselbeck. Even at his most infamous moment, the legendary “we want the ball and we’re going to score” line at Lambeau Field in the 2003 post season, he remained unflappable. The fact that minutes after he uttered those fateful words Hasselbeck would throw a game ending interception could have hung around him like a career ending albatross. Instead he took ownership of the moment and rather than snapping out at people who kept bringing the story up he gave a simple explanation. It was his first playoff game and he had delivered the line in a moment of exuberance after the Hawks had scored late to force overtime. It was meant as a joke to his former teammate and early career mentor Brett Favre and he claimed he didn’t realize he’d be picked up on the referee’s mike.

He didn’t have the strongest arm and he certainly won’t be remembered for his running ability. Mike Holmgren, who coached him for most of his seasons in Seattle, once compared watching Hasselbeck run to watching a giraffe on ice skates. That elicited the great response of “how would he know?” from Hasselbeck which was a pointed dig at Holmgren’s disdain for quarterbacks who dared leave the pocket. But he had an abundance of the two things any NFL quarterback needs. Toughness and smarts. He seemed to take big hits delivered to him as personal challenges and was almost always able to get back up and keep pitching.

He and Holmgren shared similar easy going and approachable personalities off the field but in game they became the type of fire breathing competitors you need to be to win in the NFL. After one of their sideline conversations devolved to the point where they looked  like a pair of football Sam Kinisons they agreed that after bad plays they would both observe what Holmgren called a “cooling off period” before talking to one another.

Hasselbeck pulled off a rare feat among Seattle athletes with one of the most graceful exits ever. His final Seattle game as a Seahawks player was the playoff win over New Orleans in January of 2011. In the run up to that game some Seattle fans (you KNOW who you are) actually wanted Charlie Whitehurst to play quarterback. Fortunately, reason prevailed and Hasselbeck delivered a memorable four touchdown performance in a game better remembered as the Beast Quake game. Many people enjoyed teasing Hasselbeck that the Beast Quake TD run took so long that it gave time for the “giraffe on ice skates” to make it all the way down field and escort Marshawn Lynch into the end zone. 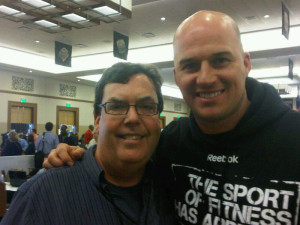 At the Super Bowl shilling for Reebok.

A few years later at the Giants/Patriots Super Bowl in Phoenix he made another appearance on my show. Once again he managed to make it through the media center with only one person as a wing man. The person was his father Don (who also played in the NFL). They were both pitching product for Reebok shoes and we had a delightful conversation. Near the end of the talk I started giving him a hard time about being nothing more than a company shill for Reebok.

“Oh, sure,” I chided him, “you’ll come on my show and grace us with your presence but only if we talk about Reebok. What’s in this for me?” He laughed and promised to send me a pair of new shoes then leaned back in his chair and took a long look at my ample stomach before asking me a final question.

“Do you think you’ll use them?”

Maybe he didn’t realize my microphone was going to pick him up.