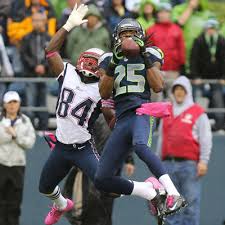 Long before he’d become a two time NFL All-pro, long before he’d established himself as a cornerback so thorough and devastating at his job he was best ignored by opposing quarterbacks, long before he tipped Colin Kaepernick’s final pass of the NFC Championship game into the air and then into the hands of Malcom Smith to seal the deal and NFC title for the Seahawks and long before his now infamous post game analysis of 49ers WR Michael Crabtree, Richard Sherman was a fifth round draft pick in the 2011 NFL draft.

Fifth round picks don’t shake the Commissioner’s hand, they don’t get interviewed right after they are picked by ESPN, and they aren’t even given much thought by the team that selects them because the break neck pace of the draft at that point forces teams to say hello quickly and then focus on their next pick.

Sherman also had the misfortune of being drafted in the middle of the NFL’s 2011 labor dispute meaning his contact with the Seahawks and Seattle media was further limited in the days after the draft. Normally the Seahawks are aggressive about setting up interviews with all their new draft picks but in this case their hands were tied. Anyone wishing to talk to a late round draft pick was going to have to be creative.

Enter my longtime KJR producer Kevin Shockey. On the Monday after the 2011 draft we were discussing ways to enhance our coverage given the restrictions caused by the labor dispute. I was pessimistic that we could do much, if anything, but Shockey had noticed something about one of the players taken by the Seahawks and had an idea on how to get him on the show.

“Richard Sherman is really active on Facebook,” Shockey told me during our daily meeting. “I’m going to send him a message and see if he’ll respond.”

“Great,” I heard my mouth saying even as my mind screamed “FAT CHANCE!” I just didn’t think it would be all that likely for a guy to agree to do an interview via a request sent by Facebook.

But Shockey was absolutely correct. He had Sherman booked within a few minutes for that afternoon’s show. I knew at the time that this was potentially a very good get as a guest. Sherman’s story, a Stanford grad straight outta Compton, was compelling. He also had switched positions in the middle of his college career (from wide receiver to corner) and of course he had played for Jim Harbaugh who had just left Stanford to take a job with the Forty Niners so we could ask him about that.

I use the word “potentially” because often interviews with drafted players are bland, dull, and predictable. Players at that point are still young and usually not all that experienced in doing interviews. They are cognizant of their rookie status and don’t want to do anything perceived as rocking the boat which can lead to a lot of very polite, very short answers to questions. 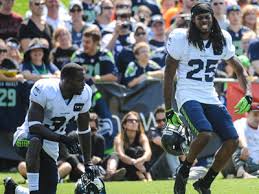 Richard Sherman’s first Seattle radio interview was very polite. But his answers weren’t short. Almost immediately I could tell that if this young man could make it as a player he was going to be a great interview. He listened to the questions and gave thoughtful and humorous answers. And I would humbly submit “if you put me on the moon I’ll learn to be an alien” as his first great Seattle quote.

It’s also fun to consider this: while at Stanford it was Sherman’s idea to change from receiver to corner. He went to his coaches and proposed the move, which eventually had to be approved by Harbaugh. If the head coach had said no, perhaps Sherman would not have ever been a cornerback. Perhaps he wouldn’t have been in the south end zone early last Sunday evening and perhaps the Seahawks wouldn’t have won that game.

But Harbaugh DID say yes and thus was hoisted on his own petard by a man whose loquaciousness may not always rise to Shakespearian levels but who is nevertheless an unending source of interesting thoughts.

Courtesy of KJR Radio here is Richard Sherman’s first Seattle radio interview from April of 2011. Joining me on the interview is Scott Soden.