LAKERS VS THE CLIPPERS FOR THE NBA CUP TITLE

LAKERS VS THE CLIPPERS FOR THE NBA CUP TITLE 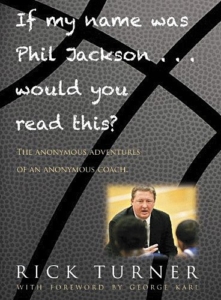 You can get details on how to buy Coach Turner’s book right here.

We’ve made it to the title game and it’s a Tinseltown Throw-down as the gaudy, NBA royalty level Lakers take on the Clippers who are not quite on that level. Our finals story (as written by Jamaican National basketball coach Rick Turner) features a list of Clippers players who were once All Stars, a list of Clippers players in the Hall of Fame, Franco Harris, and Steve Ballmer on a jetski. You’ve made it this far in the NBA Cup…why not plow ahead and find out who wins?

For the first time ever, the ubiquitous NBA-arena cry of “Beat LA” will ring throughout the Staples Center.

Twenty years after the Yankees beat the Mets in five games for the World Championship in what was referred to as the “Subway Series”, the West Coast gets a version of its own. But I’m not clever enough to come up with my own moniker for this one and besides, these two teams aren’t exactly the Hatfield’s and McCoy’s. They’re more like the Have-field’s and the McNot’s.

While the Lakers are NBA royalty, the Clippers have been the Court Jesters – pun intended. In fact, from 1970 to 2001, going back to their days as the Buffalo Braves, you could stick your arm in a 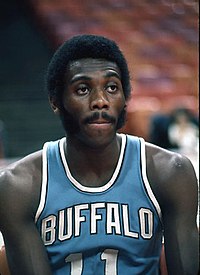 The greatest Buffalo Brave of them all, Bob McAdoo

tiger cage and still count the number of Clippers who were NBA All-Stars. And the total games those guys have played in, wouldn’t even get you two points in cribbage (14).

The Lakers meantime, had 15 guys appear in 56 All-Star games over that same stretch, to go along with 17 Hall of Famers.

Who are the Clippers Hall of Famers you ask? That reminds me of a story.

In 2006, I went to Detroit with a friend to see the Seahawks play the Steelers in the ‘Hawks first Super Bowl. At the time it was Pittsburgh’s sixth trip to the Big Game (now eight). The night before the game, we went up to the bar at the top of the GM Center, which was headquarters for the event. 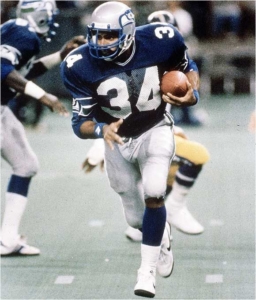 Number 34 racks up some of the 160 yards he gained in his illustrious career as a Hawk.

In the bar we spotted legendary Steeler great Franco Harris across the room, holding court with a bunch of “corporate-types”, probably talking about the Immaculate Reception or showing off his Super Bowl rings – as I would imagine he does whenever he talks to people.

My pal grabbed the vodka/cranberry he ordered (yes, he’s a man, I know) and made a beeline for Franco. I cringed but couldn’t help but watch from my wuss bubble across the room. He taps the Hall of Fame running back on the shoulder, holds out his hand and says something. Franco smiles and returns what seems – from my distance away – to be a pleasantry.

My friend returns (with his drink now empty of course) and just says, “Nice guy”.

As much as I really didn’t want to give him the satisfaction of asking anything more about it, I couldn’t help myself.

“I just walked up to him, shook his hand and told him that he was my favorite Seahawk of all-time.”

There was no better line that could have been delivered to Franco Harris at that moment. On a list of 1000 things one might say to Franco Harris upon meeting him at a bar, the night before the Super Bowl between his Steelers and the Seattle Seahawks, THAT came in at number 1 on the list. In fact, this would end up being the pinnacle of my buddy’s jock-sniffing career. One that has been long and not so illustrious. It’s amazing that I haven’t just co-opted that story as my own by now. I probably should.

If you’re confused by that story. Franco Harris played for 12 seasons in Pittsburgh where he rushed for just shy of 12,000 yards and 100 touchdowns. He spent his final season in the NFL (1984) with the Seattle Seahawks for just eight games, rushing for 160 yards and 0 touchdowns.

What does that have to do with the Clippers Hall of Fame players? 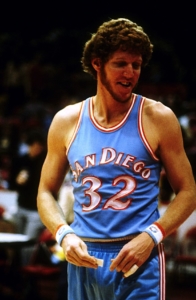 The greatest San Diego Clipper of all time. “I rode my bike to Mexico today.”

I mentioned that the Lakers had 17 of them, in that stretch from 1970-2001. Well, the Clippers had six and all of them had a little bit of a Franco with the Seahawks kind of vibe.

Okay we get it… the Clippers were an NBA punch line equivalent to our Seattle Mariners, but those days are over. These are no longer your Billy Crystal’s Los Angeles Clippers and it’s important to get context for the monumental moment that this represents in the franchise’s history. Despite his cartoonish sideline antics, there is no disputing the sagaciousness of the Clippers’ front office moves, since Steve Ballmer forsook us all in Seattle, six short years ago. 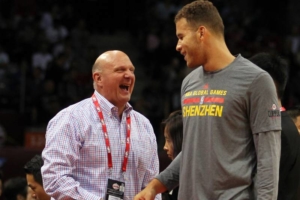 He also relieved Head Coach Doc Rivers of his dual role as GM/Coach and slid Lawrence Frank in as GM, the timing of which correlated to the dramatically improved roster that includes two legit NBA elites in Kawhi Leonard – the reigning Finals MVP – and seven-time All-Star, Paul George.

The Lakers counter with the face of the NBA, the uber-elite LeBron James and their own seven-time All-Star (in only eight seasons), Anthony Davis. The two LA teams met three times this season. The Clippers won the first two, including the first game of the year and the Lakers won their final meeting on March 8th.

While I’ve mentioned throughout the tournament, the only inconsistent part of the Clippers season has been their health. Otherwise, they pretty much know from one game to the next, what to expect. Who will do what, how/where their scoring opportunities will come and all the pieces of their defensive identity. That makes things extremely easier for a coach.

The Lakers know that LeBron and AD will normally show up big, but where they get other contributions has been a revolving door.

One night it’s Tacoma’s own Avery Bradley, the next night it’s Danny Green. Another time, KCP steps up big and the next, it’s Kyle Kuzma’s turn. That makes things slightly more challenging for Frank Vogel but at the same time, it’s a little tougher to game plan for if you’re Doc Rivers.

That’s a really (really) long preamble to finally get to what I’d expect from this game. And by now, if you’ve kept up on this entire tournament with us, you will already have a good idea where I sit.

From a stats point, these two teams are really evenly matched. From a personnel stand point, I think the Clippers have a slight edge.

I love the stoic constitution of Kawhi Leonard, who lets his play do his talking. I love the makeup of the Clippers roster which is adaptable to various styles of opponents while still maintaining the ability to impose its own will.

Ultimately, I think the Clippers will defend like someone rubbed sardine oil on the Lakers sneakers and then throw them in a meat grinder, never to be heard from again.

… and then ride off into the sunset on a JetSki.