MARCUS HAHNEMANN GETS HIS CHANCE TO SHINE

MARCUS HAHNEMANN GETS HIS CHANCE TO SHINE

About a month ago I got a call from my friend Brian Robinson who invited me to a happy hour/fundraiser at the Columbia Tower Club. I eagerly accepted his invite for three reasons:

1. I love the view from the Columbia Tower Club.
2. The fundraiser involved Sounders players bar tending and raising money for America Scores Seattle.
3. Brian indicated a willingness to buy me drinks.

It was a beautiful early autumn afternoon and standing 76 floors above our city watching day slowly fade to night was a treat for the senses. Brian and I talked sports, music, beer, and politics.

I was getting ready to leave the party when I saw Marcus Hahnemann. I stopped to chat and we began discussing the season and the possibilities ahead for the team. He was in the middle of a sentence when he paused for a second and looked at me.

“I really,” he said, “Wish I could contribute more.”

The implication was clear. This wasn’t a judgment on Michael Gspurning or a criticism of Sigi Schmid for a lack of playing time. It was simply the competitive fire still burning brightly inside a 41-year-old athlete who is smart enough to see the grains of sand rapidly emptying out of the top of the hourglass.

I could see in his eyes that desire that exists in athletes, to perform on stage in front of thousands of fans. It’s a feeling that gets stronger as the end of the line approaches. Every athlete, as he nears the end of his career, longs for one more chance to feel the glory and maybe even recapture, briefly, a moment of his more youthful self.

Hahnemann returned to Seattle in 2012 and knew that Gspurning was established as the #1 keeper. But like any athlete he had the confidence in his own ability and a belief that his chance to play would come but as the season was winding down it looked like that was not going to happen. 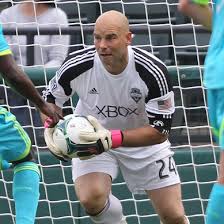 We chatted for a few more moments before I left. As I rode down the elevator I found myself wishing Hahnemann would get a break. Not because I dislike Gspurning but because I could see in his eyes how badly he wanted that one more game.

A lot has happened since that late September night. The Sounders collapse was the worst October slide since the market crash of 1929. Along the way, Hahnemann got a couple chances to contribute. He was brilliant in Portland on a night when the Sounders hit the crossbar about 43 times. He was solid versus Dallas on another day when the Sounders were unable to find the back of the net.

Then came last night. Gspurning’s ejection in the 85th minute was the kind of thing that happens to teams that are fading. Suddenly…an ice-cold keeper has to come in and defend a one goal lead in a must win game. It smelled like disaster. But here was Hahnemann, a cool veteran more than up to the task and desirous of a chance to do something for his team. He kept the sheet clean and when Eddie Johnson rammed home the winner a few minutes later the gigantic and passionate Sounders FC fan base could finally exhale.

Gspurning’s ejection makes him unavailable for Saturday night’s first leg Western Conference semi final versus Portland. So once again, for the fourth time since that night on the 76th floor of the Columbia Tower, the Sounders will turn to their veteran backup.

Every Sounders fan wants a great performance on Saturday night for all the obvious reasons. But no one is going to want that more than Hahnemann who with the typically unpredictable suddenness of sports has gotten his wish.

The book can now be purchased at both Sounders teams stores (Stadium and downtown) and at Third Place Books on Bothell Way in Lake Forest Park.

I’ll be at the stadium pro shop on Saturday afternoon starting at 530pm selling and signing books. Please stop by on your way in to the match.

If you’ve read the book I’d appreciate it if you were willing to post your thoughts in the review section of Amazon.