MLS NEEDS TO PICK UP PACE OF PLAYOFFS

MLS NEEDS TO PICK UP PACE OF PLAYOFFS 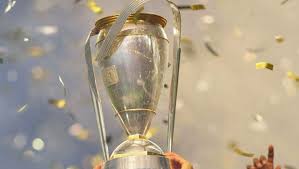 Real Salt Lake will challenge Sporting Kansas City Saturday afternoon for the MLS Cup. To gear up for this monumental challenge the Salt Lake side played exactly 90 minutes of soccer in the 27 days leading up to the title game.  This gives KC a huge edge since the Sportings (?) played 90 minutes in 28 days leading up to the final. That extra 24 hours of rest may be the key.

This preposterous bit of scheduling, due in part to this being a run up year to the World Cup, is a gigantic error that MLS should have seen coming (and should have fixed) a long time ago.

Today’s Wall Street Journal featured a piece by Kansas City native Kevin Helliker on the fact that the MLS Cup game is being obliterated in the KC media by the University of Missouri’s football team shockingly finding its way into the SEC championship game in the Tiger’s first year in the league.

Helliker points out that the MLS Cup will be played before a SRO crowd but also accurately concludes that outside of the fans attending the game at Former 7 Time Tour De France Winner Stadium most people in Kansas City will be focused on the SEC game.

This is all good and well but it’s ultimately a pretty pointless argument because it boils down to nothing more than bad scheduling luck which can only be controlled to a point. The bigger issue here is bad scheduling period, which not only can be controlled but can be avoided entirely with a little common sense and planning.

That resulted in a complete loss of any momentum MLS might have had coming out of the conference finals. There needs to be a pace to the games that enthrall us, particularly the championship level games. This is NOT the NFL, which has a gigantic media horde willing to feed the public’s insatiable demand for news. The NFL takes two weeks between conference finals and Super Bowl because they can. For MLS to do the same thing, after just taking two weeks off in the middle of the conference finals is a mistake.

How to fix it? Easy. You’re a league that plays a schedule different from any other in the World. So take advantage of that and play more games in the summer when the weather is good. I know midweek games have been attendance challenged but that’s a problem that can be attacked from several different angles. I’m not talking about playing every Wednesday, simply add a couple more weeks where everyone plays a midweek game. This would shorten your regular season so it could end in mid October allowing for a championship game to be played on a Saturday in mid November.

Let’s also stop with the time off between playoff games. Let the momentum build. Play in game, conference semis, conference finals, Cup. It should be easy to schedule those games in a four-weekend 28-day window. They’ll take 31 days next summer to play the entire World Cup. That’s 7 days less than this year’s MLS playoffs. Semi final winners in MLS got two weeks rest before the finals. World Cup semi final winners will get three days. 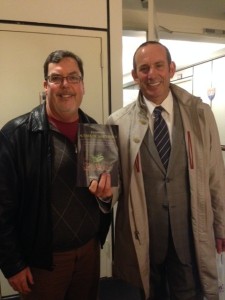 It’s easy to take shots from where I sit.

Perhaps I should have fired these thoughts at the Soccer Don last month when I stopped by his office to say hello and present him with an early holiday gift.

But it’s also easy (and necessary) to fix this issue. Tighten up the schedule a bit and see if more casual fans can be attracted to your biggest match of the year. Because casual fans will remain casual when there’s only been 180 minutes of MLS soccer in the past 28 days.

I’ll watch the MLS Cup game with my friends from Sounder at Heart at their viewing party. I’ll be selling and signing copies of my book for savvy soccer holiday shoppers. Here’s a complete list of December book events.

Agree? Disagree? Need a good rumcake recipe for the holidays? Post a comment below or email me.