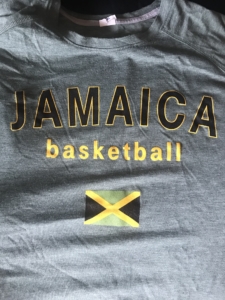 Four teams, two winners, one building, and a killer concert to wrap the whole thing up. That’s the story of the first-ever NBA Cup Final Four. If you need to catch up, best begin at the beginning. If you’re wondering how we arrived at the Pacers, Lakers, Jazz, and Clippers all meeting in Los Angeles, you can find Elite Eight game results right here. From there, work your way back. After conceiving of this mythical tournament, I realized it would be wise to farm out the actual work of writing about the games to someone else. So I “hired” my old friend Rick Turner who is an author as well as the coach of the Jamaican National basketball team. By “hired” I mean asked him to do all this work for nothing. Matter of fact, he’s down two snappy Jamaican t-shirts (see photo at left). Rick wrote everything below here, with the exception of the photo credits.

Hey all you cool cats and kittens!

Welcome to the national semi-finals for the 2020 NBA Cup.

I have to hand it to NBA Commissioner Adam Silver. His ability to mobilize the muscle and weight of the NBA league office while remaining innovative and flexible has been other-worldly. The concept for this semi-final demonstrates all of those qualities and puts on full display – a celebration of the game, the resiliency of a great country and a kind of unofficial permission to go back to living our lives in as close to normal way as we can remember. As an NBA event, the tickets – like with the Super Bowl or NCAA Tournament – are not controlled by the teams, but by the league. And as such, the league is able to distribute them as they see fit.

I think Commissioner Silver knocked this one out of the park when they decided to make this a double-header at Staples Center and offer tickets to healthcare workers and first responders throughout LA County… then to top it off, they throw in a bonus. 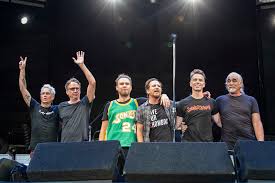 Pearl Jam (with Jeff A festooned in classic Sonics gear) would be a perfect choice for a post NBA Cup show.

Here’s the schedule for this once-in-a-lifetime Staples Center event:

It’s going to be a night to remember.

One could say that the Pacers are at this point, playing with house money. Peaking while playing together and in a position to play the us-against-the-world card. The “no one believes in us” card or as Eddie Vedder growled in the opening line from the song Animal, “1, 2, 3, 4, 5 against 1… 5… 5 against 1”.

For the Lakers, it always seems to be about LeBron but with all respect to Giannis, Harden, Luka and Kawhi… Anthony Davis is ridiculous. 26.7ppg/9.4rpg/2.4blk, a 50-piece v. Minnesota and the first 40/20 game for the Lakers since Shaq, is all AD has managed to put together for his first (and only?) year in LA.

Pacers Coach Nate McMillin talks about his team playing with what he calls, the three C’s: Calm, Clear, Connected. But in this environment, on this day, their ability to pull that off will be seriously challenged. Indiana was able to beat LA back in December, thanks in part, from a huge game by Domantas Sabonis who went for 26 and 10. And although, Victor Oladipo still wasn’t available for Indy, the Lakers were missing AD.

The stars shine brightly in these kinds of big games, and I would expect that to be the case here. The Lakers are certainly more than LeBron and Davis but this may be one of the biggest stages in NBA history and we will be blessed to see both of these two superstars at their superbest. 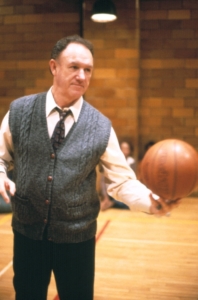 The Pacers are lacking in the “star power” category. They find themselves here because they play together and all the inevitable comparisons to the movie “Hoosiers” will come out leading up to this one. In fact, rumor has it that the Inside the NBA crew, who are doing the pregame show on-location for this one, will have 90 year-old Gene Hackman on set for a segment and that he’ll be doing the narration for the opening video to the game broadcast (what a voice). Can’t wait for that!

Actually, don’t say anything, but I’ve obtained a copy of Coach McMillin’s pregame speech to his team. I’ll show it to you but please keep it just between us…

There’s a tradition in tournament play to not talk about the next step until you’ve climbed the one in front of you. I’m sure going to the NBA Cup finals is beyond your wildest dreams, so let’s just keep it right there. Forget about the crowds, the size of the city, their fancy uniforms, and remember what got you here. Focus on the fundamentals that we’ve gone over time and time again. And most important, don’t get caught up thinking about winning or losing this game. If you put your effort and concentration into playing to your potential, to be the best that you can be, I don’t care what the scoreboard says at the end of the game, in my book we’re gonna be winners!

Unfortunately, even Coach Nate summoning his inner-Norman Dale won’t be enough for the Pacers to pull this one out.

This is the LeBron and AD show… 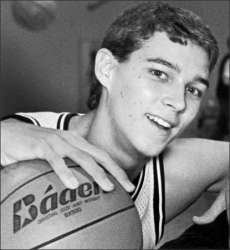 Quin Snyder smiling after dropping 80 on Rick Turner. (I know, the copy says 40, but it’s like what doctors do when they ask you how much you drink.)

When South Mercer Junior High’s Quin Snyder went for 40 against a head gear wearing Rick Turner and his Rose Hill Royals back in 1982, many thought that might be the high point, athletically, for the young Mercer Island product.

It might have been for the guy pounding on this keyboard right now, but I think we can all agree that Coach Snyder has acquitted himself quite nicely since delivering that adolescent beat-down – which was so emasculating that it delayed the collective puberty of our young Royals squad by at least a year.

Stepping into this NBA Cup Semi-Final game, on this stage, with all of the basketball world’s eyes watching (and a handful of Pearl Jam fans as well) – could be the defining moment to an already fascinating career. If nothing else, it will certainly shine the spotlight on a team that generally performs it’s work in the NBA’s shadows.

And that team – the Utah Jazz – will find themselves with their hands full against a team who is quite accustomed to performing in the league’s bright lights – the LA Clippers.

Back in the early 2000’s, I used to play Wednesday morning old-man hoops with Steve Ballmer and a group of other Microsoft Executive “types” at the Pro Club in Bellevue at 6am. I don’t know 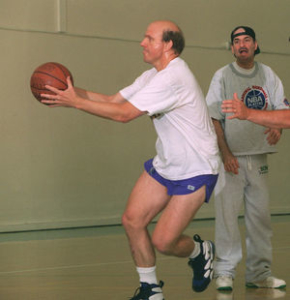 The owner of the Clippers roars to the hoop.

how I got involved or why I was even let in to their “invite-only” game, it might have been because of Jim Marsh but I don’t specifically remember.

A friend of mine, who plays in a pretty popular rock band, told me once – a long time ago – that he never really knew if people wanted to be his friend because of who he was or because of what he did. That resonated with me, so I’ve always tried to keep my space from “famous” or “successful” people as a way of avoiding them thinking I had ulterior motives. Not sure if that makes any sense or whether it was ultimately my own hang-up, but that’s how I’ve operated.

So, as such, I never really got to know Ballmer very well. Even though I showed up for a lot of those Wednesday mornings, I never tried to compete with the others there (kind of pathetically) vying for his attention. Although one cool thing that came out of it was that I got to play hoops with Bill Bradley once. When he was running for President, the former Senator (and NBA HoF’er) came out to Seattle to try and get some of that Microsoft money. My scouting report on Bradley? His problem was that he could only go left (insert rim shot emoji).

The Clipper’s bench might be the second-best team playing in this game.

Reggie Jackson, Landry Shamet, Lou Williams, JaMychal Green, and Montrezl Harrell. This lineup would compete for a playoff spot on its own.

It’s been an interesting year for the Jazz. From mid-December to late-January, they won 19 of 21 games and looked like they had a great feel for who they were. But then they lost five games in a row, then won four games in a row, then lost four in a row and then won five in a row again, before the season was shut down. So, I guess consistently, inconsistent would be a way to describe what you’re getting with this team.

Consistency has also been an issue with the Clippers but their consistency – or lack there of – could be entirely attributed to a revolving door of injuries and thus, lineups. As a matter of fact, Kawhi Leonard, Paul George, Patrick Beverley and Lou Williams have only played in 25 total games together this season. But with the layoff, everyone is healthy now, and the Clippers finally get to use this tournament to see what could have been during the regular season.

As I said in the first-half of this historical double header between the Lakers and Indiana, these types of games are for superstars and while the Jazz aren’t the Pacers when it comes to star power – Mitchell and Gobert are knocking loudly on that door – the Clippers feature two of the league’s elite in Leonard and George.

This is actually not a bad match up for Utah who is 2-1 against the Clips this season – handling them 120-107 in LA. But the idea of watching Ballmer go s*** whacky from behind the basket is too delicious to pick against here.