With the exception of the result, Sunday’s 26 to 20 Seahawks OT win versus Denver was everything that Super Bowl XLVIII was not. From the second Manny Ramirez sent the first snap of THAT game zooming past a wide eyed Peyton Manning the rout was on. And while the rematch was one sided for much of the day there was never the feeling that the Hawks had this one in the bag until Marshawn Lynch pin balled his way into the end zone, zoomed up the stadium ramp, jumped into a waiting space ship, and roared off to wherever it is he roars off to after games.

This one was tense, taut, and very much in doubt. When Manning finally turned back into Manning in the fourth quarter it was game on. The overtime win tells the Hawks at least two things they probably already knew. First, they are a tough, resilient bunch. Second, they will get the best shot from every team they see this year. For some observers that best shot from Denver was incomplete. “NFL overtime is unfair,” they whine. “Both teams should get a turn! No fair! No fair!”

This argument is so flawed and full of barnyard floor debris that those who attempt to make it end up giving off a malodourous stench and here’s why. It completely ignores the fact that at its’ very core football is about defense. And defense, we are told by everyone from Coach Puffnsnort in the Pop Warner league to Coach Carroll of the Super Bowl champions, wins championships.

The Broncos DID have a chance in overtime yesterday. 13 of them as a matter of fact. 13 snaps where they could have sacked Russell Wilson, stepped in a passing lane and picked off a pass, jarred a receiver or running back so hard as to force the ball loose. Or simply sack up, make a play, and force a punt. It’s a huge part of the game during regulation. But the whiners want us to forget about it in overtime. “OK,” their logic goes, “our defense couldn’t stop you so now our offense should get a turn.”

The NFL already tweaked the overtime rules so that a team DOES get a turn if the team that wins the toss kicks a field goal on their first possession. That, in the fantastic parlance of the NFL, is called “modified sudden death”. I hate it. It devalues defense and turns the whole thing into a game better played at recess. “Ok, little Johnny. Your team gets another turn!”

When your team loses a coin toss at the start of the overtime it means your defense has to play out of their minds and do everything possible to get the ball back. That, to me, is what sudden death overtime means. If we want to keep the FG caveat, OK. But let’s not add the touchdown to it. Defenses are tough enough and they don’t need rule modifications. 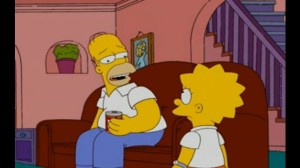 “Mom sure will be excited about this!”
“You’d think so, but no.”

In a long ago Simpsons episode Homer is explaining gambling on the NFL to Lisa. When she finally gets it she utters that classic line. When Homer wins $50 on Lisa’s advice, Lisa is ecstatic which leads to another classic exchange.

LISA: “Wow, Mom sure will be excited about this!”

In addition to an edge of the seat fourth quarter and overtime on a perfect weather day yesterday’s game also featured a soul crushing defeat for Denver gamblers.

By kickoff the point spread was down to Denver getting 4 or 4.5 but for most of the week it hovered at 5 points. Broncos fans who found the points irresistible (and for that matter, Seahawks fans who took the points expecting a close game) were taken on a roller coaster ride in the final minutes of the game. (According to Covers.com almost 56% of the money in Vegas was on Denver.)

When Denver cut the Hawks lead to 12 on a safety in the fourth quarter, those who had the points sat up. One TD would make it a five point game and a push for those with the points. At the very least they’d get their money back and in some cases on parlay bets a push is a win. Of course, Denver got that TD. 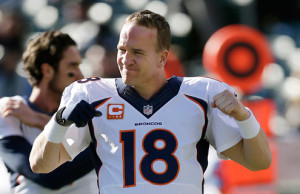 “Dammit! I have GOT to stop throwing the ball to Chancellor.”

So now…it’s 17 to 12. Denver gets the ball back and is driving. At this point, if you’ve got five points, you’re feeling pretty good. Then, for the second game in a row, Manning decides to hit Kam Chancellor right between the ol’ 3 and the 1. Presto! Seattle ball. Chancellor returns the pick 52 yards. This puts Seattle in business at the 35. But it’s still a five point game. So all you need is for Seattle to take three plays to get a first down. By then there will be under two minutes to play and Denver will be out of timeouts. The Hawks will kneel out the game and win 17 to 12.

Instead, Marshawn Lynch gets a first down on the first play. The Hawks are then awarded half the distance to the goal on a personal foul. So now it’s first down at the 13. Again, all you need to get a push with the five points is a Seattle first down. They don’t get one and end up kicking a field goal to make it an eight point margin. Denver gamblers are toast.

Except they’re not! Peyton Manning roars his boys down the field and picks up a touchdown in the final seconds to cut the margin to two. Now, if you’ve played the Broncos, you are rooting for them to miss the two point conversion. Then you win your bet. But they convert and it’s on to overtime where they lose the coin flip. But that’s OK…all you need to win your bet now is for Denver to hold Seattle to a field goal. Which they can’t do. Final spread is six points. Those with Denver and the points lose. Losing happens but seldom do you get yanked around like Denver bettors did for about 45 minutes on Sunday afternoon.

If we applied overtime whiner logic to this story those holding Denver tickets would be at the window right now saying they deserve another chance.