As Erik Lacitis reported in today’s Seattle Times KIRO TV has decided to give Pat O’Day the “that’s it, thank you, we’re done” treatment.

Upfront I’ll say that Pat is a dear friend and a mentor to me so I’m hopelessly biased regarding this story. That said….

So let me see if I’ve got this straight. There’s no room in the droning, unending, 7 hour hydro broadcast for the guy who loves this sport more than anyone else in the world? There’s no room at all in a 7 hour show for history and perspective from a guy who at 78 is sharper than most broadcast executives?

On a typical hydro Sunday there’s about 25 minutes of racing action spread out between 10am and 5pm. That leaves 6 hours and 35 minutes of analysis time. But KIRO TV has decided not to take advantage of a walking encyclopedia of the sport. What a joke. There’s enough down time in that broadcast that they could stop cars on the I-90 bridge and interview drivers.

To be clear, I don’t think this is going to cause a huge ratings hit. I’m not blinded by my love of Pat to the point that I think people really plan on tuning in or tuning out because he’s involved or not involved. What irritates me is the fact that cutting him out completely is such a defenseless decision.

I don’t know Jake Milstein but his quote in Erik’s story is the kind of priceless babble broadcast management specializes in: “Pat is a great guy. We’re revamping the broadcast to make it better.”

Wait a second. If he’s a great guy why are you moving him off the show? How is that going to make things better?

In the past few years Pat started filling a different role within the broadcast. I teased him that he had become like Jack Whitaker, the veteran TV broadcaster who ultimately became a sort of historical essayist at big events. My favorite Jack Whitaker story by far is the fact that he was banned from covering the Masters for years after (God Bless Him!) referring to the gallery as a “a mob scene”.

How is it possible that having Pat continue to fill the role of historical essayist would in any way harm the broadcast? Use him two or three or four times over the SEVEN hours you’re on the air to add flavor, color, and the kind of balderdash he specializes in. Trust me, viewers love it. For many in this town Pat is and always will be the hydros. And why we’re still lucky enough to have him, we should use him.

Hey KIRO TV, here’s an idea. If you’re dead set on making your broadcast better by taking away a legend, why not at least give him a chance to say goodbye? Announce that this is his last year. Let him do several commentaries on the sport that you could archive and then use forever. Then announce that at the end of the show he’s going to be given 5 minutes to say good bye to the fans.

Think you’d get a ratings point or two for that?

It’s not too late to admit you’ve made a mistake. Consider my idea. It’s a good one.

(I’d address the radio side of this story but I’m still laughing at a radio GM saying that “we couldn’t make changes to our team at the last minute”. Since when is a decision made in JUNE for a broadcast that airs in AUGUST the last minute?)

I spoke with Pat this morning and he was his usual humorous, sharp self. I told him not to make plans yet. Sometimes these things have a way of working themselves out. 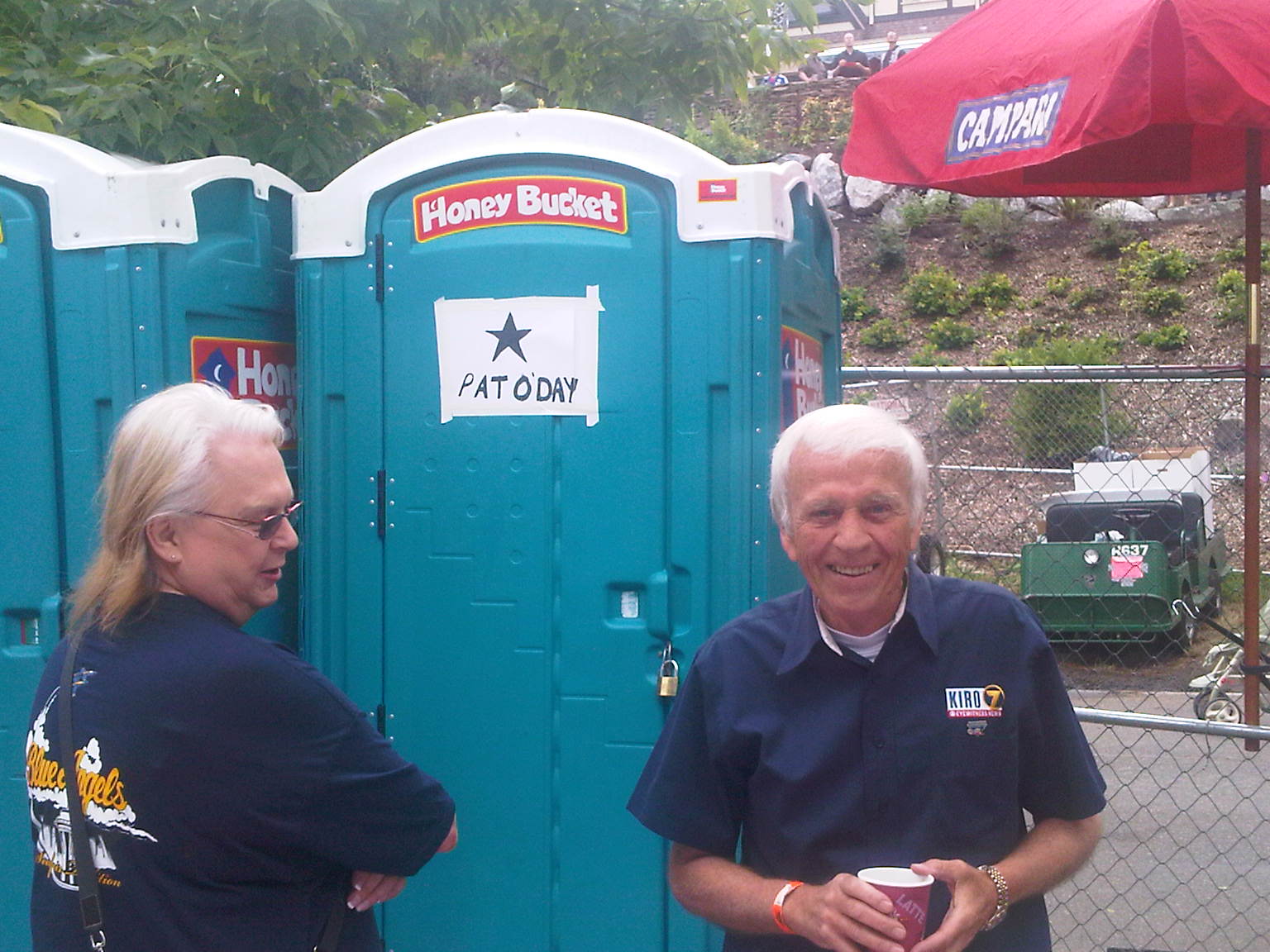 Is this the reason Pat O’Day has been removed from the KIRO TV team? His private port a potty costs too much?