Four years ago this Saturday the Seahawks hired Pete Carroll to be their head coach.

In the midst of one of the headiest seasons any Seattle team has ever enjoyed it’s difficult to remember that at the time the Seahawks were not only questioned (by media and fans alike) for the hire but were also portrayed (somewhat accurately) as an organization in decline; lurching, staggering, and wheezing their way towards the NFL’s loneliest outpost: downtown Mediocrity.  Carroll’s hiring came at the end of  one of the most embarrassing stretches in Seahawks history. 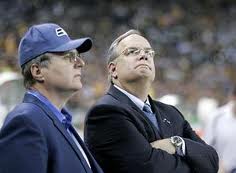 A little over a month earlier team president and GM Tim Ruskell had demanded to know his future status. That he made this demand during the worst two-year stretch of football the Hawks had played (record wise) in nearly two decades made the organization’s choice easy and when informed the team couldn’t commit to him past the 2009 season Ruskell resigned.

The Seahawks first choice to replace Ruskell was a guy they had let walk away a year earlier. Mike Holmgren’s popular and successful run as head coach with the team ended with a thud, his final team posting a 4 and 12 record. Holmgren made it clear at that point that he didn’t really want to walk away on such a down note but Ruskell had publicly designated Jim Mora as Holmgren’s replacement six months before Holmgren’s final season started so the dye had been cast. Mora took over and Holmgren was eased into a retirement he didn’t really want.

A year later (and after Ruskell’s departure) Mora publicly endorsed the idea of Holmgren returning, a declaration that ultimately led to the revelation that Mora was on the receiving end of some snarky texts from Ruskell.

So…the Hawks wanted Holmgren back, Mora wanted Holmgren back and when he was offered the job of president and GM they believed he would take it. But on December 19th, he turned them down and three days later he took a similar job with Cleveland. The conclusion reached by fans and media observers was simple: The Seahawks were at a point where they could be beaten on a hire by arguably the worst franchise in the league. 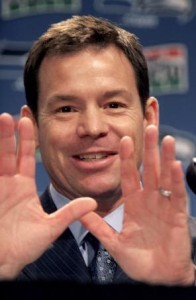 On the field Mora watched his team not only lose (they would finish 5 and 11) but often had to endure pulverization at the hands of opponents.

The Hawks final 8 losses that season came by an average of 20 points per game. They won only 1 home game in the final half of the season. Add to that the fact that the man who had hired him was now gone and it was easy to see Mora was in a potentially bad spot.

Things went from bad to worse when the season ended. The Monday after their final game (a home loss to Tennessee) Mora was told to go about his business as usual. On Wednesday of that week he held an end of season news conference and expressed confidence in his future with the team. On Friday he was fired and three days later the Seahawks announced they had hired Carroll as their new head coach.

This entire episode was, without a doubt, the low point of Tod Leiweke’s tenure as CEO of the Seahawks. He had displayed a mostly golden touch during his near decade in town. He had arrived in 2003 when the Hawks were having trouble selling out their new stadium. (4 of the first 9 games in what was then called Seahawks Stadium were blacked out on local TV.) Among other things it was Leiweke’s idea to build a flagpole in the south upper deck and raise a giant #12 flag before every home game.

He ultimately revived the business side of the organization and along the way played a key role in the creation of the Boeing Classic and the deal struck that led to the formation of the MLS Seattle Sounders.

But the stank of this mess was all over him (and for that matter the man he reported directly to, owner Paul Allen.) He had hired Ruskell, and backed Ruskell’s decision to hire Mora. He then had to dismiss them both. The fact that he had become friends with both men made the decisions that much more difficult on him. In between those two moves he unsuccessfully tried to woo Holmgren back to the organization as Ruskell’s replacement.

Now to rebuild a franchise that had gone 9 and 23 over two forgettable seasons the Seahawks were turning to a guy who had twice been fired as an NFL coach and they were doing so with their president and GM job still open which meant that whomever they hired for that gig was going to have to take Carroll as head coach like him or not. A week after Carroll’s introductory press conference Leiweke announced that little known John Schneider had been hired as the team’s new general manager; his first such NFL job. 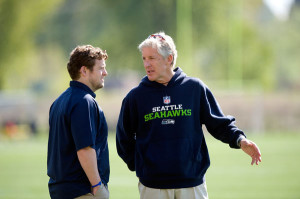 To many NFL observers (both national and local) this did not look like a recipe for success and given the pratfalls of the previous six weeks a reasonable person could be excused for thinking the Seahawks were entering circle the drain mode just four years after playing in Super Bowl XL.

Four years later we now know how things worked out. Leiweke (and Allen) should be credited for making the bold decision to blow up a mess of their own creation and have the willingness to take the risk of starting over. Leiweke read Carroll’s and Schneider’s personalities perfect when it came to the big question of whether they could work together in a slightly nontraditional format of hiring the coach before the GM.

This Saturday, four years to the day that they hired Carroll, the Seahawks will play in the NFL playoffs for the third time in his tenure. They enter this weekend as the favorite to win the Super Bowl. It was an outcome impossible to imagine during that wretched stretch at the end of 2009. And it’s a great example of the primary reason sports holds such an allure for those of us that it captivates. You never know what’s going to happen.

Those who would like to learn more about the Seahawks and their important influence on the formation of the MLS Seattle Sounders FC are encouraged to check out my book “Sounders FC: Authentic Masterpiece”. You can order a copy by clicking the green link at the top right of this page, or through Amazon. Retail locations can be found here.