SOCCER MEDIA COVERAGE LACKING? WHAT? WHERE?

SOCCER MEDIA COVERAGE LACKING? WHAT? WHERE?

That Calvin and Hobbes cartoon was a birthday present from my lovely wife many years ago. It is among my most prized possessions and hangs in a place of honor in my office.

It’s been almost a year since I left KJR radio and I’ve spent much of my time in the past 11 months immersed in soccer and specifically Sounders soccer as I researched and wrote my book. I’ve had 100s of conversations with fans, team officials, players, media members, and the occasional beer vendor. One subject that continually came up in the conversations is the lack (or perceived lack) of soccer coverage in the Seattle media. Sounders GM and owner Adrian Hanauer even addressed the lack of electronic media coverage in the last paragraph of this Seattle Weekly article.

He’s right, or at least on the right track. We may not see a complete turnover in how talk radio approaches the game but little by little you’re going to see broadcasters and journalists who grew up with a working knowledge of the sport and therefore don’t run and hide or stand and throw stones when it’s brought up. Meanwhile, Seattle based soccer fans lament in conversation after conversation with me that there is a severe shortage of coverage for the sport.

I’ve been on a media tour the past month promoting the book and I’ve come to the conclusion that while there could be more media coverage of the sport there’s actually a lot out there particularly for Seattle fans.

Let’s start with the Weekly article (which I’m told was the most picked up copy of the Weekly in six months). Here is a case of a well known and respected media outlet devoting an absurd amount of space to the sport and the cultural revolution it brought to Seattle. Soccer fans dutifully snapped it up.

I’ve been able to get on any show I’ve wanted to (both TV and radio) within the past month. Part of that is because I’ve built good relationships with people but part of it is also reflective of the growing interest in soccer. These people who are booking me KNOW what I’m going to talk about and are willing to embrace it even if only for a few minutes. That’s progress. These kind of appearances wouldn’t have happened five years ago.

It’s not just Seattle either. I’ve been on several podcasts both locally and nationally.  Locally, radio legend and podcast GIANT Marty Reimer gave me lots of air time in between discussing drunken misadventures he had in LA. Nationally I’ve been on (and subsequently become a fan of) Soccer Morning with Jason Davis. Sports Illustrated ran an excerpt of the book as did the Seattle Times.  Paul Silvi and Aaron Levine were kind enough to have me on KING and KCPQ.

Before I come off as too much of a “look at me” ego maniac I hasten to point out that the coverage doesn’t begin or end with my book. 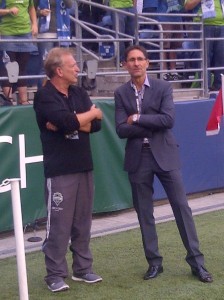 Yesterday, Adrian Hanauer gave his first press conference since the Sounders fiasco-filled end of the season swoon. It would be nice if some Seattle outlet had carried it live but in lieu of that at least three solid, credible sources live tweeted it. Don Ruiz of the News Tribune, Joshua Mayers of the Times, and the crew at Sounder at Heart. Savvy fans with a smart phone (99.9 percent of the Sounders fan base) didn’t miss a thing.

All three outlets provided solid day after recaps. Mayers and Ruiz posted a transcript of the call as well as analysis. Sounder at Heart meanwhile showed off “new” journalism at its’ absolute best with a pair of well done articles on Sigi Schmid’s fate. Keep him or can him-no matter your preference-SAH has you covered.

I understand that fans of soccer (like fans of any sport or any thing) want more, more, more. It would be nice if Seattle’s THREE all sports talk radio shows(which generate over 120 hours a week of local programming) could find more than a few crumbs to toss your way. They don’t.

But look at everything that IS out there. Reliable print coverage in both of the area’s major daily papers (and regular coverage on the great site Sports Press Northwest, too). Numerous local blogs and podcasts updated regularly with new, solid content. An amazing amount of national coverage on the sport via websites, podcasts, and newspaper guys like Philadelphia’s Jonathan Tannenwald. SiriusXM has an entire channel dedicated to soccer.

You can’t force people to like soccer. You can’t force media to cover soccer. Fortunately for Seattle based fans there are plenty of places to satiate your soccer jones. They may not always be available through traditional media outlets, but isn’t that how soccer fans would want it, anyway?

Focusing on who doesn’t cover soccer is like throwing a party and worrying about who didn’t come. Entertain the guests who did show up. With any luck, the keg won’t be dry by the time the lolly-gaggers get there. Meanwhile, there’s more beer for us.

BOOK UPDATE: I’ll be making TWO appearances at bookstores on Saturday. At 130pm I’ll be in Burien and at 630pm I’ll be in Lake Forest Park. Buy a book and I’ll sign it. Bring a book you already bought and I’ll sign that. Along the way we’ll discuss how it’s sometimes hard to keep up with all the media coverage soccer gets.