FOR INFO ON THE “SOUNDERS FC: AUTHENTIC MASTERPIECE” BOOK LAUNCH PARTY JOIN THE MAILING LIST VIA THE LINK ON THE RIGHT SIDE OF THE PAGE

The credit (or the blame) should go to Aaron Reed.

Reed is a member of the Emerald City Supporters and was their travel coordinator when he reached out to me in 2011 to donate a travel package to the KJR Kares a thon for a Sounders Cascadia Cup match in Vancouver. I not only took him up on his generous offer but also told him I would love to attend a match with the ECS sometime to experience their madness first hand.

It took a while but we finally were able to make it work on October 7th of last year when the Sounders played the Timbers. I met Reed at Fuel which was crowded, chaotic, and wonderful. We left the bar and walked across the street to Occidental Park where the “March to the Match” was about to begin. Reed would lead the fans to the stadium and carry the Cascade Cup along the way.

As we arrived at the park I heard someone’s voice blaring over the PA system to the 1000s of fans who had gathered for this pre match ritual. I looked over to the small stage they set up for the event and was stunned to see that the voice I was hearing belonged to the team’s primary owner Joe Roth. 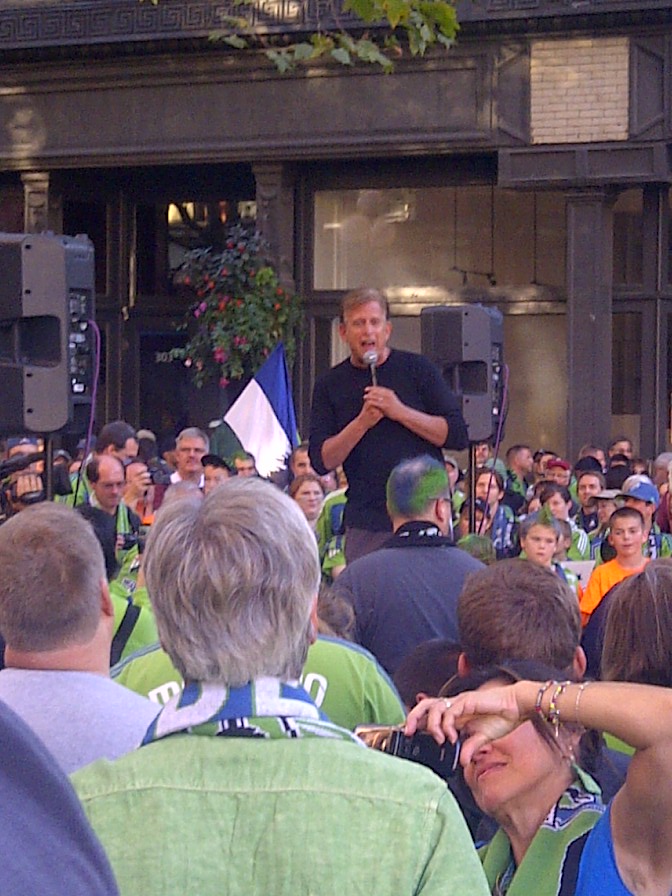 I guess I had heard that Roth occasionally addressed fans in this incredibly cool and casual way but to see it happen was amazing. Here in Seattle (like most cities) we’ve had…complicated…relationships with our sports owners. The idea that the owner of the team was standing in a sea of people basically taking on all comers was amazing to me. Most owners of most teams in most cities spend most of their time parked in a luxury suite. Seeing Roth among the people had a powerful impact on me.

A few minutes later I was scrambling down Occidental Street working to stay in front of Reed and his merry band of rabble-rousers. 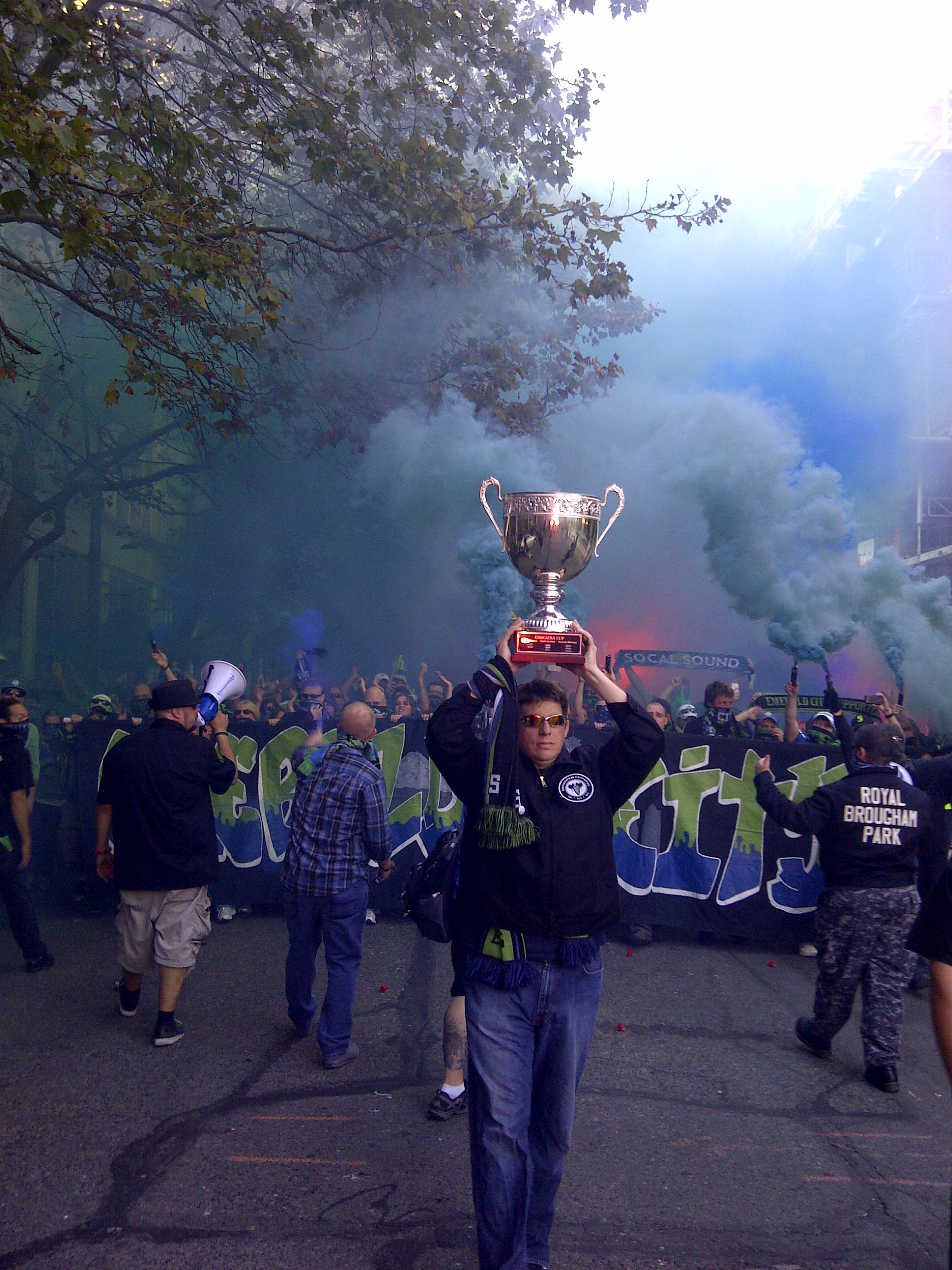 We worked our way down Occidental and ended up in the stadium. About an hour later I found myself involved for the first time in displaying a Tifo. It was not lost on me that the people who work on these huge works of art have absolutely zero view of their work because they’re all underneath the Tifo when it is unfurled. 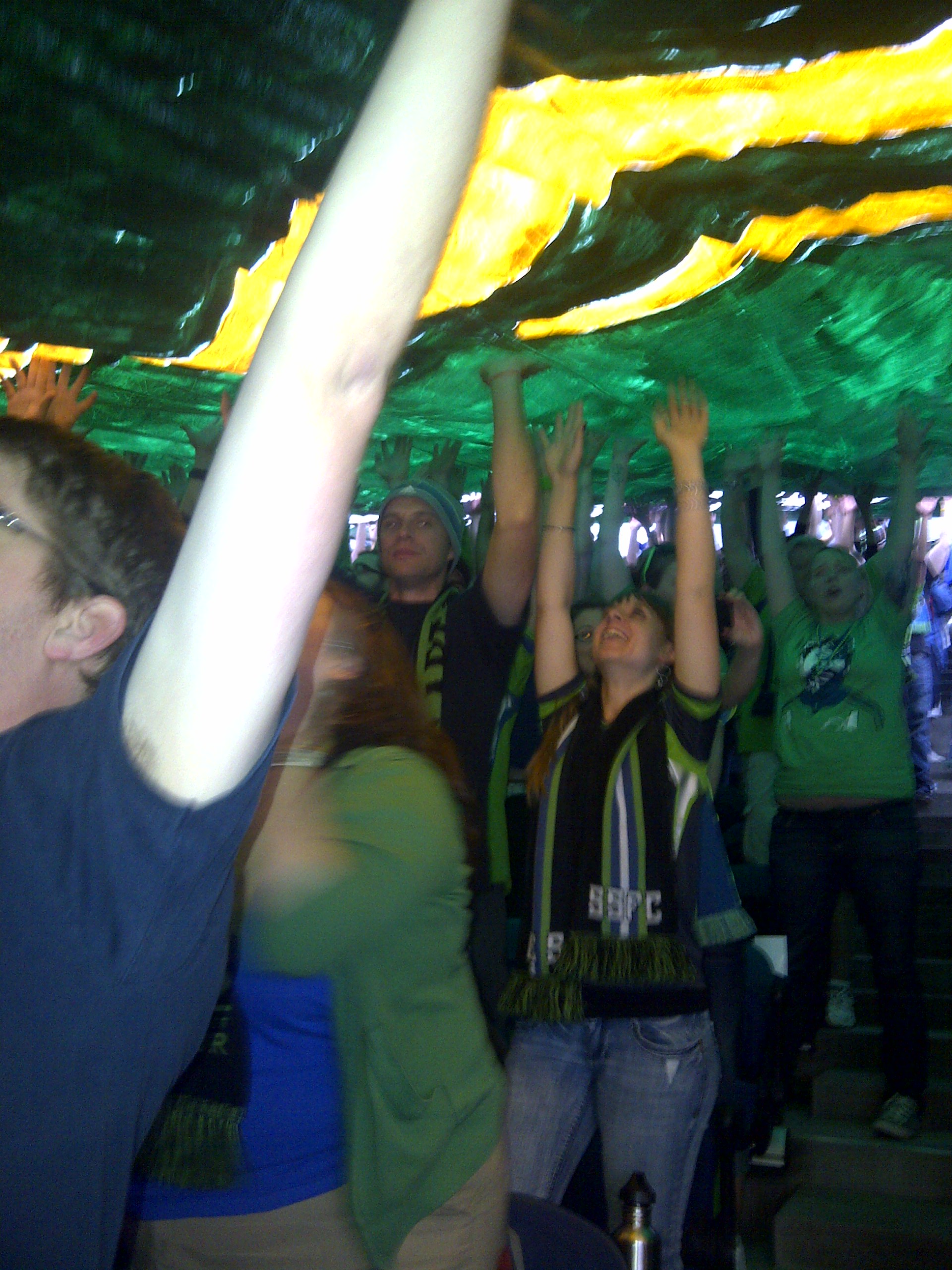 In front of 66,000 plus fans the Sounders would roll out to a 2 nil halftime lead en route to a 3 nil spanking of the Timbers. The atmosphere in the ECS sections was like nothing I’d ever experienced. Non stop singing, dancing, and cheering for the home team with a delightful (and rare in these days) 100% lack of cynicism.

At half time I was given the honor (briefly) of holding the Cascadia Cup. 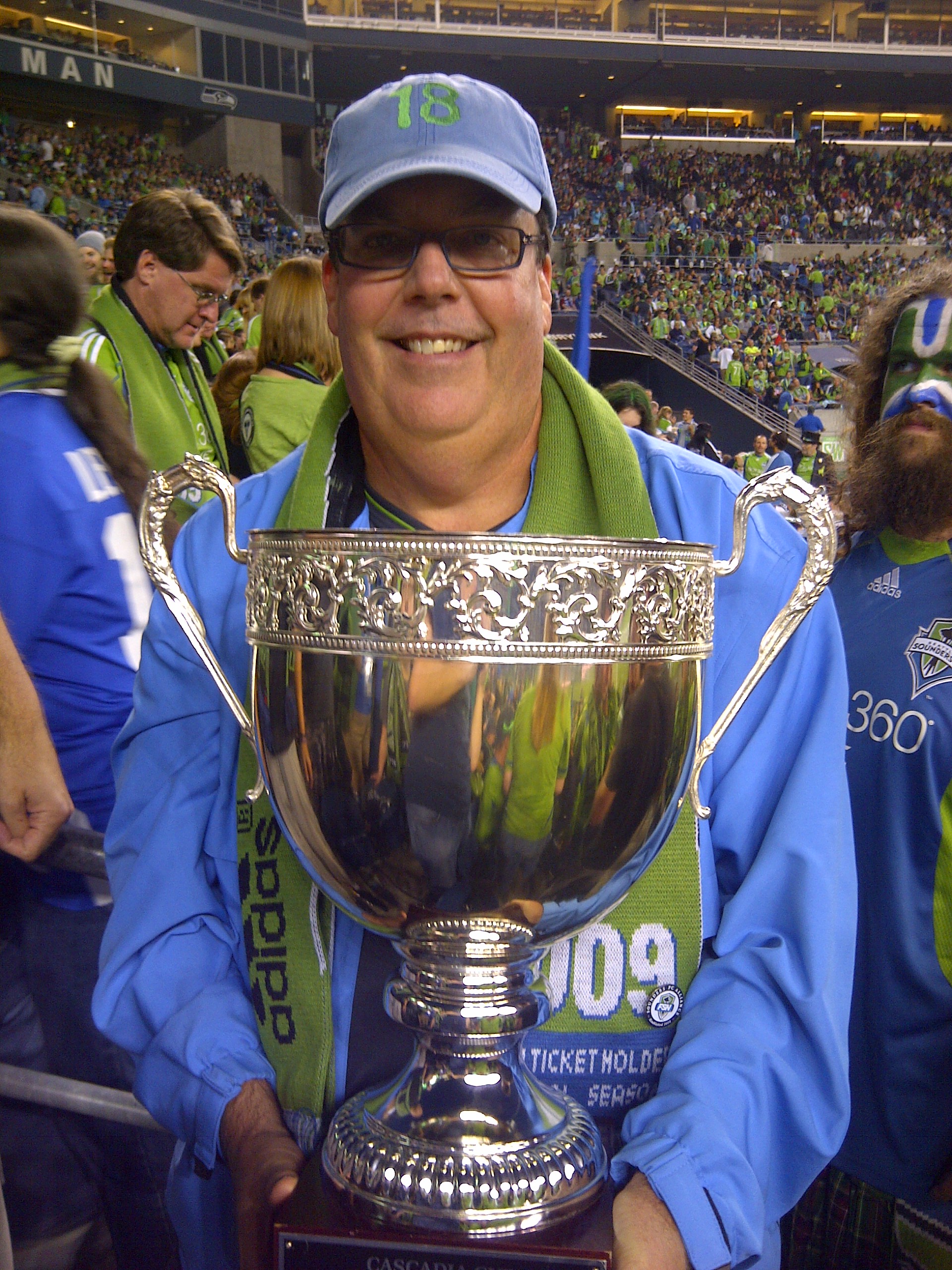 I can’t pinpoint the exact moment during the evening when it occurred to me that someone, maybe me, should write a book about this. But by the end of the night after a walk back through downtown to my car I had convinced myself that this story needed to be told. I had already decided I was going to be leaving KJR when my contract was up in December so I knew I’d have time on my hands. This story would be the perfect project.

It mixed all the elements I love: sports, culture, business, music, history, and best of all a group of really interesting people who made it all happen.

In January I began a series of what would become dozens of meetings covering 100s of hours interviewing all the people who had made the launch of the team into MLS in 2009 a reality. My first lengthy meeting with owner and GM Adrian Hanauer took place in Tucson, Arizona. We ate breakfast and talked Sounders while a snowstorm raged outside. 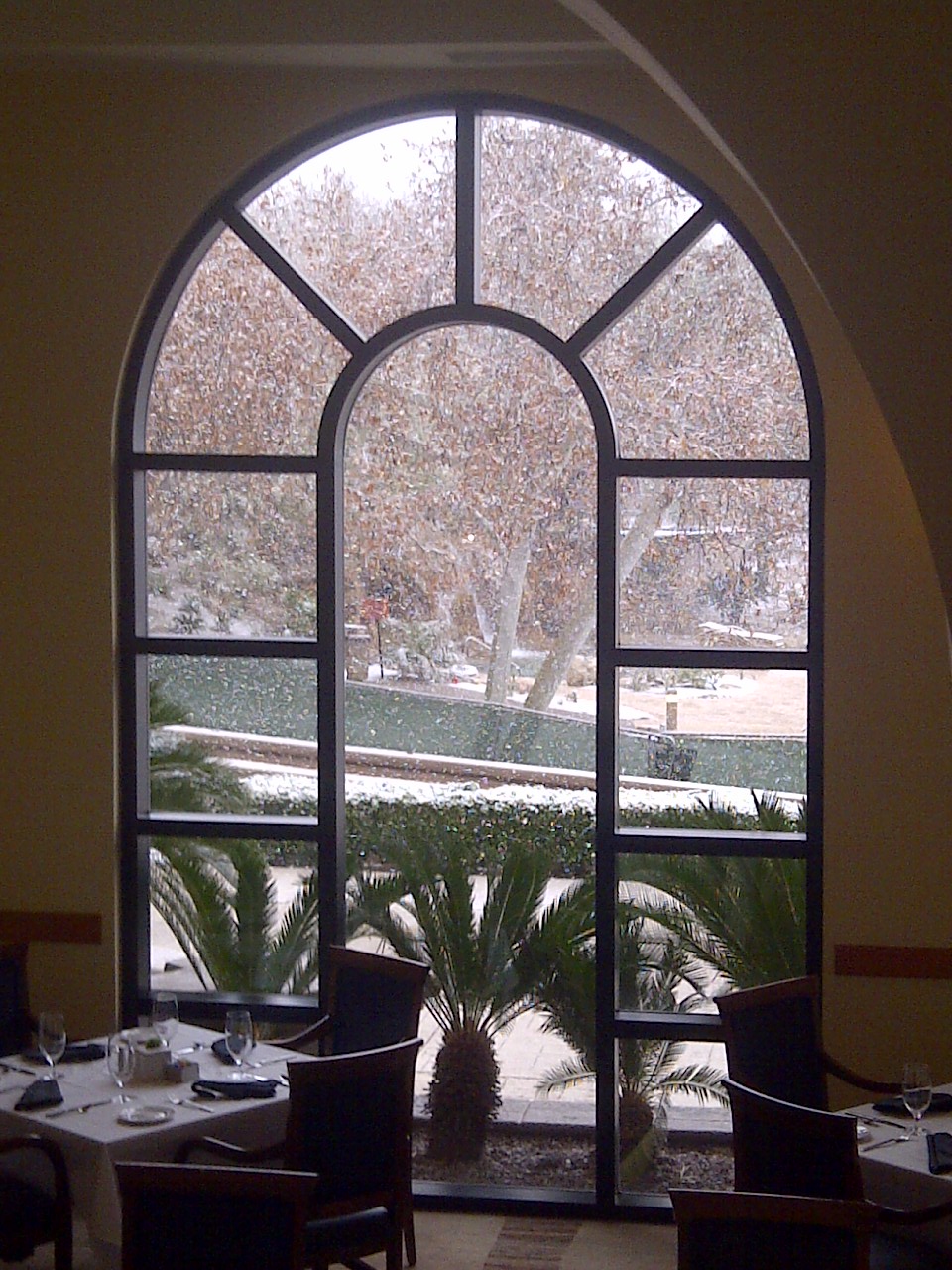 Whether that should have been taken as a sign or not is now long past the point of debate. Last week I hit “upload” on a website and “Sounders FC: Authentic Masterpiece” was sent to the publisher. The book focuses on the people and events that have combined to make this the most successful launch of a  professional sports franchise in American history. Some of the primary characters are familiar–Roth, Hanauer, Sigi Schmid, Kasey Keller–others are behind the scenes people who played huge roles. People like Gary Wright, Tod Leiweke, and Fred Mendoza.

The story ended up being just as good if not better than I thought it would be. There are many great anecdotes, coincidences, lucky guesses, and smart moves that all added up to this amazing phenomenon.

And to be sure, it IS a phenomenon. It’s my hope that people realize this is NOT necessarily a book just for soccer fans or just for Sounders fans. This is a story that anyone in Seattle should enjoy and take pride in, soccer fan or not. You don’t have to love the sport to love the idea that for once, Seattle is the big dog in a sports league. To do so took more than just rolling the ball out there. The ownership group and management team did an incredible job from the very first day of listening to the fans and reacting and responding to them in a truly engaged way.

Every team in every sport in America could take lessons from the Sounders on how to treat your fans.

Because they listened, the fans responded and created this organic culture that springs to life before every match in the downtown and Pioneer Square areas. And it was that atmosphere that struck Clint Dempsey as he walked around the city earlier this summer the night Seattle played Vancouver. It convinced him that if he came back to MLS there was one place he’d want to play. 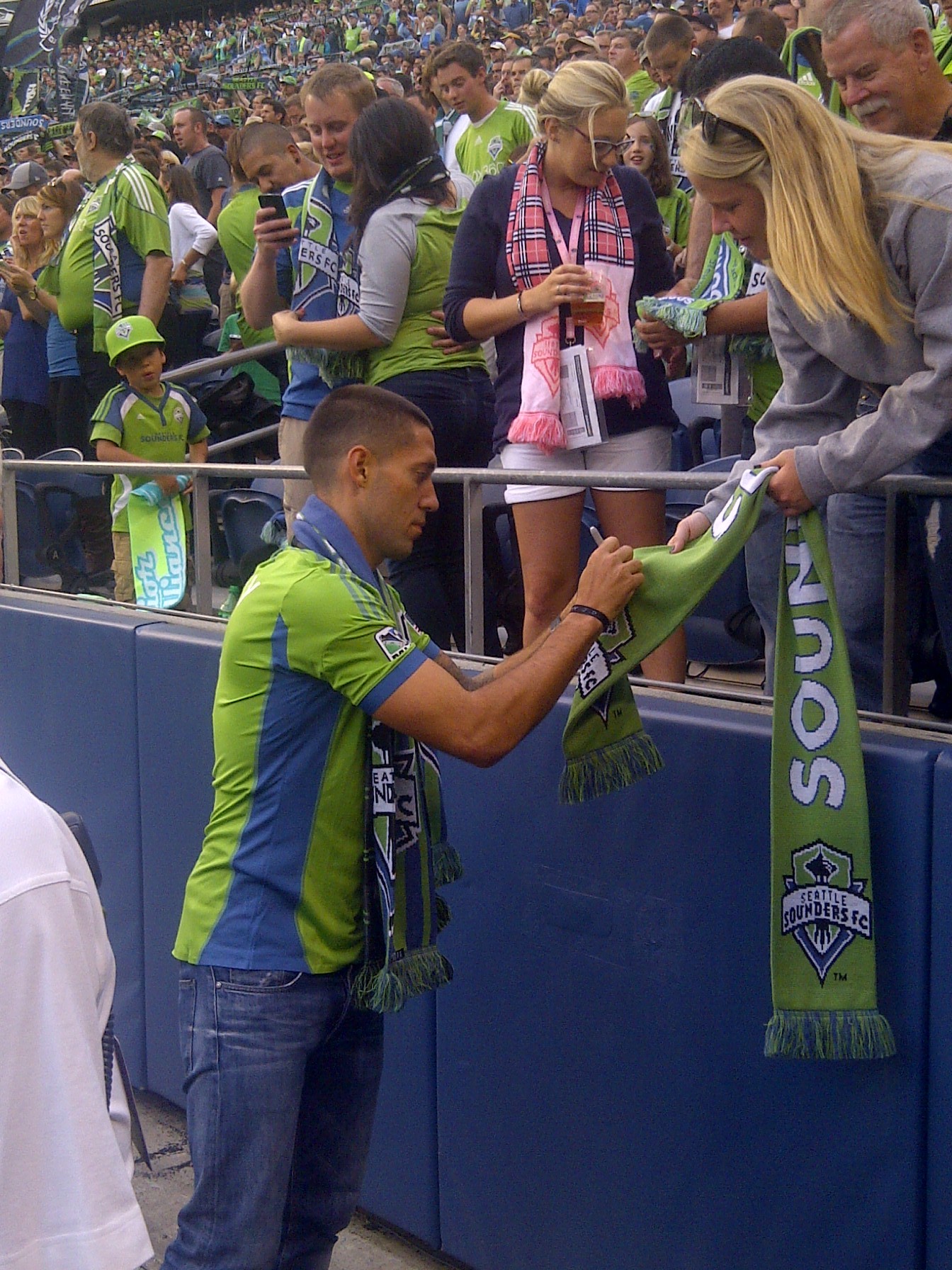 The Sounders signing of Dempsey last month put a nice little bow on the story and the book will include details of how it all happened.

I’m proud and honored to have convinced Sports Illustrated’s Grant Wahl to write a forward for the book. Somewhere along his Magellanesque journey covering the sport around the globe he was kind enough to give the book a classy and solid start.

Here’s the synopsis of the book I’ve had posted for a while on my website.

The book will be available in mid-October and I should have an exact date to announce (along with a list of launch parties) in about two weeks (by mid-September). I can’t wait to get this great story out there.