THE DRAMATIC IMPACT OF SOCIAL MEDIA ON THE FAN EXPERIENCE

THE DRAMATIC IMPACT OF SOCIAL MEDIA ON THE FAN EXPERIENCE

The Seahawks, for obvious reasons, have never been as popular as they are now. “Real” 12s like to dispute this and will tell you the Hawks have always been this big. That conveniently overlooks the fact that the team failed to sell out four of the first nine games played in what is now Century Link Field. Old school Seahawks fans know you don’t have to go that far back to find a time when games weren’t guaranteed to be on TV.  But those days are long gone and with a Super Bowl trophy now residing in Seattle the Hawks are sure to be huge for some time. They deserve it and so do the fans. Their rise to popularity has come, coincidentally, at the same time as an historic and dramatic communication revolution equal to almost any in history has happened. We’re talking of course about social media. 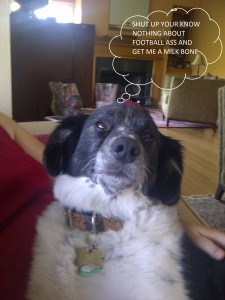 Shot of actual dog listening to author of column talk about Seahawks game.

The increasingly ubiquitous nature of social media in our lives has changed the way we experience games. Not too long ago your thoughts during a game were shared only with the people near you at a home game or in the room with you watching a road game.  If you chose to watch a game on TV by yourself, you-GASP!-might not be able to share a single thought with any living being besides your dog for three entire hours.

Now, for good or for ill, we all have easy access to a tiny machine that can instantly share our all of our thoughts, or read the thoughts of others within the connected world. This allows us a window into the varying degrees of passion and rationality (or lack thereof) with which people watch these games and the dominance the Seahawks enjoy over our weekend lives in the fall and winter.

I first personally experienced the power, for lack of a better word, of the Seahawks in regard to social media late last year. I was in the middle of the holiday push for my book “Sounders FC: Authentic Masterpiece” when the Hawks lost on a Sunday afternoon three days before Christmas to Arizona. Like anyone trying to retail a product in the final, frantic days before the holiday I was looking at all angles. About an hour after the Hawks loss I posted what I thought was a pretty innocuous pitch for the book on Facebook and Twitter.

“If you’re down about today’s Seahawks loss,” the post went, “maybe a new book for Christmas will cheer you up!”  I put my phone down and forgot about it for a while thinking I’d check back later to see if I’d made any sales. I came back later and had, in fact, sold a few books. But that part of the deal paled in comparison to the attacks I was being subjected to by 12s in various degrees of sobriety. The gist of their complaints could be boiled down to one post:

“HOW DARE YOU TRY TO MAKE MONEY OFF A SEAHAWKS LOSS!!!!”

I laughed my way through post after post of people more or less blaming me for everything wrong in the world, or at least everything wrong in the Hawks loss. By the end of the night most people seemed to calm down and I DID manage to sell a few extra books so it turned out ok, I guess. (Speaking of which….ahem…Hey fans! If you’re down about yesterday’s Hawks loss, maybe a new book for the Autumnal Equinox will cheer you up!”)

I was thinking about this yesterday as it became apparent that the Hawks had their hands full in San Diego, eventually losing on the road to a pretty good team. I watched as the rather huge community I have access to on Twitter and Facebook worked their way through the day and it suddenly occurred to me that I was seeing a real life application…to a football game, mind you…of the Kubler-Ross model of the five stages of grief. Here, rearranged for our purposes, are some examples:

Savvy fans realized early on that this game would be a tussle. That didn’t stop them from having the blind loyalty that comes with being a fan in the first place.

This started around half time. Even the most steadfast of supporters was starting to see how tough this was going to be.

Sample tweet: “OK. That was just one half. The coaches WILL make the right adjustments. As long as we don’t turn it over in the 2nd half we’ll be OK. SEA!-”

The Hawks woes continued into the second half. They were never really out of it…but they didn’t appear to be into it, either.

Early fourth quarter. Again…the game is far from over. But many fans are halfway past the label on the whiskey bottle now and are feeling their blood boil. Better at this point to blame something that has nothing to do with anything.

Sample tweet: “Has ANYONE else noticed that the TV announcers are rooting for the Chargers?”

Shortly after the game. Truth is, MOST fans took this game for what it was: a tough road game against a good opponent. They remember that the Hawks lost on the road to Indy early last season and quickly begin looking ahead.

Sample tweet: “OK. NBD. One loss on the road. We’ll bounce back. I can’t wait to hear what Richard Sherman has to say in the post-game.”

Among other things social media has allowed us to create our own little (or big) families for these games. Like a family, fans come in all shapes and sizes. The optimist. (“We’re gonna be OK! We got this!” Posted 32 times between 1:05 and 4:10.) The pessimist. (We are clearly not ready and are going to lose! Posted after Nick Novak’s FG in 1st quarter.) There are the coach wanna-bes. (“Do you think Pete reminded the guys to drink a lot of water?”) And the mother hens (“REAL fans would never turn on their team!”)

Around and around the social media whirl spins and while some people choose to ignore it I am fascinated by it. Maybe you’re the smartest football fan ever. Or maybe you just started watching the game in the past two years. Maybe your Dad took you to games in 1976. Or maybe you’ve never been to a game in your life. It doesn’t matter because in the world of social media we are all able to throw out points…good, bad, or ugly for consumption by the general public. And when it’s all said and done social media is now one of the best examples of the best thing about spectator sports. The very best thing about spectator sports is that it is one of the last things we have that can unite different people in a community for a common goal. We don’t have much left that does that and based on the news headlines we need it now more than ever.