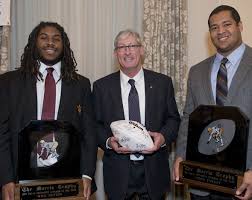 Since 2010 I’ve been on the Board of Directors for the most unique award in college football, The Morris Trophy. It’s the only award voted on by the players.

Since 2013 I’ve worked with the WAC on staging “The Main Event” which is the only two day college boxing tournament in America.

In 2016 I worked with the WAC on the first ever National Collegiate Rugby Awards which were presented at a banquet in June of that year.

For all three of these projects I’ve worked closely with WAC athletics director Wayne Milner on promotion, marketing, and content creation.