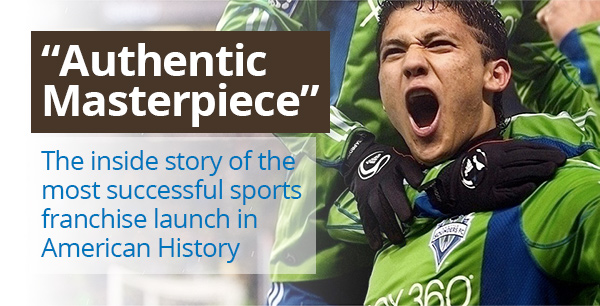 In November of 2007 Major League Soccer (MLS) announced that the city of Seattle would receive an expansion franchise in the league to begin play in 2009.

The announcement was the culmination of a long effort to bring the highest level of the sport available to Seattle. It also came after a series of fortuitously timed events, chance meetings, and a spirit of cooperation between four very different men who ultimately made up the ownership group.

During the earliest meetings concerning the team several interesting discussions occurred. There was a real push from within to not use the nickname “Sounders” for the team. There was an incredible effort to convince people who worked for the Seahawks and didn’t know much or didn’t care much about soccer to take on the challenge of running the team (without a bump in pay). Then there was this: acknowledgment from all involved that if the team could draw as many as 12 to 15,000 fans per game the entire thing would be deemed a success.

Sounders FC: Authentic Masterpiece tells the inside story of the amazing MLS launch of the Seattle Sounders which arguably is the most successful launch of a new sports franchise in North American history. The story begins with the near departure of the Seattle Seahawks to Southern California in 1996 and traces the events that took place over the next several years that led to the Sounders debut in March of 2009 in a thrilling win over New York in front of a (then) record crowd of over 32,000 fans.

The book also tells the back story of the key people involved in the Sounders. From Coach Sigi Schmid’s days as an accountant in Los Angeles to the accident that bonded team announcer Arlo White and Sir Alex Ferguson to team owner and GM Adrian Hanauer’s self assessment that when he began his Sounders career in 2002 he had “no idea what he was doing.”

There’s also the story of the on field players and their respective journeys to opening night. Kasey Keller, who would become the team’s star player and finish his sensational career as a goalkeeper in the place where he grew up, nearly didn’t join the team. Osvaldo Alonso joined the team after defecting from Cuba. And a group of players made the jump from Seattle’s successful USL minor league team to help give the MLS Sounders a ready-made heart, soul, and culture not usually available to expansion teams.

One of the team’s assistant coaches (Brian Schmetzer) was a direct tie to Seattle’s legendary NASL franchise and team sporting director and Everett, Washington native Chris Henderson came one day away from taking another job before finding out at the last minute that Seattle was getting a team which allowed him to fulfill a dream of being involved in bringing top level soccer to his home town.

Finally, the book tells the story of the most unique fan/team interaction in North American sports, an interaction that was fueled by ideas from team owner Drew Carey and a fan attitude put into place by the amazing Emerald City Supporters.

Sounders FC: Authentic Masterpiece is a story of smarts, luck, timing, perseverance, and ultimately success. It’s the intersection of many talented people who all brought a key ingredient to the table.

When it hit with the force with which it hit it was one of the coolest things we’d all ever been through.

The whole thing was like a big cosmic boom. Every thing came together. Every single thing you would want just kind of happened.

I thought there could be something interesting going on in this city. This is different from the experiences I’ve heard from other guys coming back to MLS.

By the time they told me I’d made the team, I would have played for a bag of peanuts. I wanted it that bad.

On opening night the clock hit 90 and we’re ahead 3 nothing and I knew we were going to win. I thought about my father and my childhood and the original Sounders. It was such a moment.

The inside story of the amazing, improbable, and fortuitous MLS launch of the Seattle Sounders – arguably the most successful launch of a new sports franchise in North American history.