FREE POOL, CHEAP BEER, AND A GOOD JUKEBOX LEAD TO A LIFELONG LOVE

FREE POOL, CHEAP BEER, AND A GOOD JUKEBOX LEAD TO A LIFELONG LOVE

I moved to Seattle in June of 1991 and Renee followed in August. She arrived three days after a local band named Pearl Jam released their first record, Ten. That was merely a coincidence. Neither 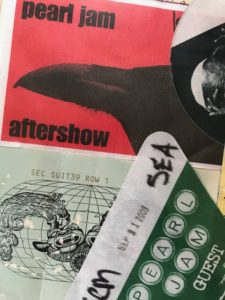 of us knew anything about the band and we were both focused on trying to get a foothold in a city that seemed too expensive while we worked jobs that didn’t pay enough. We were living in an apartment in Queen Anne and one Sunday afternoon the following spring, we walked to a bar a few blocks from our place that featured free pool, cheap pitchers of Rainier, and a jukebox.

While Renee got us beers, I perused the jukebox and saw that it contained the first Pearl Jam disc. Ten had been out a while by now and like anyone who listened to the radio in the spring of ’92 I’d received a steady diet of “Alive”, “Jeremy”, and “Even Flow”. I liked them, but I wanted to hear something different so I dropped a couple quarters into the slot and selected “Once”, “Why Go”, and “Porch.” It was obvious to me that there was a lot going on with this band and this was an album deep in great tracks. A few nights later, we watched the debut of the music video for “Even Flow” on MTV. We were both mesmerized by the intense energy we were seeing on the screen. The video features shots from the band’s early 1992 show at the Moore Theatre and it remains a classic period piece of what Seattle felt like back then.

The following Sunday was Easter and among the chocolate bunnies and jelly beans in my basket Renee had placed a copy of Ten.

In June, the band wanted to play a free concert at Gas Works Park on Lake Union. 1992 was an election year and they wanted to combine a day-long show with a voter registration effort aimed at their fans. The concert felt like it was being put together a little haphazardly and didn’t happen because the city refused to grant the necessary permits. This was due, at least in part, to Pearl Jam’s growing popularity. A show that might have attracted a couple thousand people or less in the spring of ’92 would likely draw several times that many fans in the summer. The city was worried about security, parking, and the effect on the surrounding neighborhood.

Band members appeared on local radio shows critically lamenting the decision. I really admired their plucky attitude and the whole “ready, fire, aim” feeling of the project. They eventually got a little better organized and held the show in September at Magnuson Park on Lake Washington. 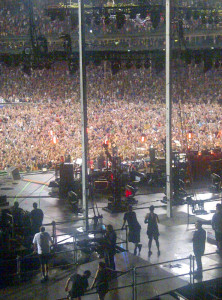 It’s 2:00 a.m. in Chicago and the band is finishing a rain-delayed show at Wrigley Field. I co-hosted a post-concert show on Pearl Jam Radio. One of three times in my life I was on the air at 3:00 a.m.

I was impressed with their willingness to attempt to be an agent for social change. Here was a band, at the very beginning of their career, concerning themselves with educating people on the simple importance of being registered to vote. This was going to be about more than rock and roll.

This was a red guitar, three chords, and the truth.

I first met bassist Jeff Ament in February of 1993 at the NBA All-Star Game in Salt Lake City. I introduced myself to him at a party and we chatted for a couple minutes. Two days later, we sat across from each other on the flight home. As we were coming into Seattle, it became apparent something was wrong with the plane. You could hear a giant “whooshing” sound that kept running the length of the cabin. The pilot told us there were having trouble pressurizing the cabin properly for landing and said we would be circling for a while as they attempted to fix the problem. He assured us we were in no danger.

That may have been true, but there was a definite feeling of tension among the passengers. I remember exchanging a couple of nervous one-liners with Jeff. At one point, Renee elbowed me and motioned to Jeff while pointing out that, “at least if we go down, we’ll make it into Rolling Stone.”

We finally got a chance to see the band live on December 8th, 1993, at Mercer Arena. The Sonics were playing the Spurs in San Antonio that night and I was hosting the pre and postgame radio shows. Sports being sports, the game went into overtime and my narrow window between the end of the broadcast and the start of the concert was being severely tested.

My friend Rick Turner was the Sonics Director of Broadcasting at the time. He also knew Jeff and made arrangements for him to stop by the radio studio to borrow a Shawn Kemp jersey. Jeff planned on wearing the jersey during the show. When Jeff stopped by he saw the game was in overtime. I pointed out my time predicament and suggested they delay the start of the show.

“Better tell the Sonics to hurry up and win,” was his response as he headed out the door.

The Sonics did, in fact, win. I told Kevin Calabro not to fiddle around during his portion of the postgame and then proceeded to host the shortest edition of Sonics Talk in history.

We then hurried over to the arena and stopped at will call to pick up our tickets. A guy in the booth heard my name and came out to introduce himself. He was the band’s manager, a guy named Kelly Curtis. I was excited to meet him but more excited to get inside for the show. Renee and I walked in halfway through the first song, “Release”.

When we walked out two hours later we had a new favorite band. We both had enjoyed their first two albums and seeing that they could also deliver live sealed the deal for us.

It’s been almost 25 years since that first show and Renee and I have been fortunate to see Pearl Jam play in many places since then. From San Siro Stadium in Milan to Madison Square Garden in 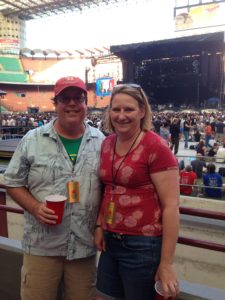 New York to the Showbox at the Market in Seattle we’ve watched the band slay audiences again and again with shows that regularly crest the three-hour mark.

I still know Kelly, who is still the band’s manager. Through him, I met Tim Bierman who runs the band’s fan club and has become a good friend. The entire organization has been incredibly generous in supporting the various charitable endeavors I’ve been involved in over the years.

Speaking of that, the band has stayed true to the idea that a great band can be about more than music. They’ve always attempted to make the world a better place by giving a voice to people who may not have one and by donating to various causes, organizations, and charities. Their Vitalogy Foundation is unlike anything else in the music business and turns every show they do into a fundraising effort to help those who need it. It’s impossible to calculate how much money they’ve given away over the years but a while back I settled on a word that I think best describes it:

I remember I used to think it was a big deal that I knew a couple of the guys in Pearl Jam. But years ago I realized that everyone in Seattle knows someone in Pearl Jam. Such is the nature of the guys in the group who tonight go into the Rock and Roll Hall of Fame. No matter how big they got they kept their feet planted firmly on the ground and remained true to their roots. They are kind, big-hearted people.