My new book on the launch of Sounders FC as an MLS franchise is due out on or around October 25th. Our launch party is set for October 22nd at the Market Arms Pub in Ballard. Voice of the Sounders Ross Fletcher will be the emcee.

Tickets are $40 and here’s what you get:

I’ll also do a reading. It’s going to be a great time. I’m self publishing and self marketing the book so the money I raise from this party will help cover some of the costs of the first printing. If you’d like to attend here’s how to get tickets:

For the second excerpt from the book I’ve chosen the start of Chapter 13 which is all about the Emerald City Supporters. I found the supporter culture fascinating and while most of the executives within the Sounders had some nervousness about the ECS (some still do from time to time) they came to recognize them as THE key cog to the success the franchise has enjoyed. Former CEO Tod Leiweke called them the “secret sauce”. Here’s some thoughts on the ECS starting with a journey to El Salvador.

Aaron Reed didn’t know if he was following the guy with the AK-47 or the guy with the shotgun. But when they stopped, he stopped. When they unlocked a gate for him, he walked through it. And when they paused to relock the gate behind them, he thanked them.

The armed security guards at Estadio Cuscatlán in San Salvador were leading Reed and a small group of fans through the stadium to their seats for the CONCACAF Champions League match between the Seattle Sounders FC and Isidro Metapán. (CONCACAF stands for the Confederation of North, Central American and Caribbean Association Football, and among other things conducts an international tournament for clubs in the northern half of the western hemisphere.)

At the end of each section of the stadium, the guards would unlock the padlock on the gate in the fence separating the sections, open the gate, and let the group through … and then they’d stop, the guard would lock the gate behind them, and on they’d go. They repeated this exercise through six sections before finally coming to their seats, which weren’t even seats.

“They were terraces,” Reed says. “It was a level piece of concrete that’s six or eight feet wide. Then it goes up six inches. Then there’s another piece of concrete.” And one other thing: “And there’s a moat in between you and the pitch that’s about six feet deep and three feet wide.”

The two guards who escorted the Seattle fans retreated, locking the gate behind them. A third armed guard appeared. He would stand next to the gate for the entire game.

The group was now locked in a section surrounded by a barbed wire-topped chain link fence. The section they were in was directly behind a goal. They would spend the game standing on concrete with a poor view of the action since they were so low. They had traveled over 3,000 miles to attend this match, and they were going to view it from the worst seats in the stadium.

And they couldn’t be happier. 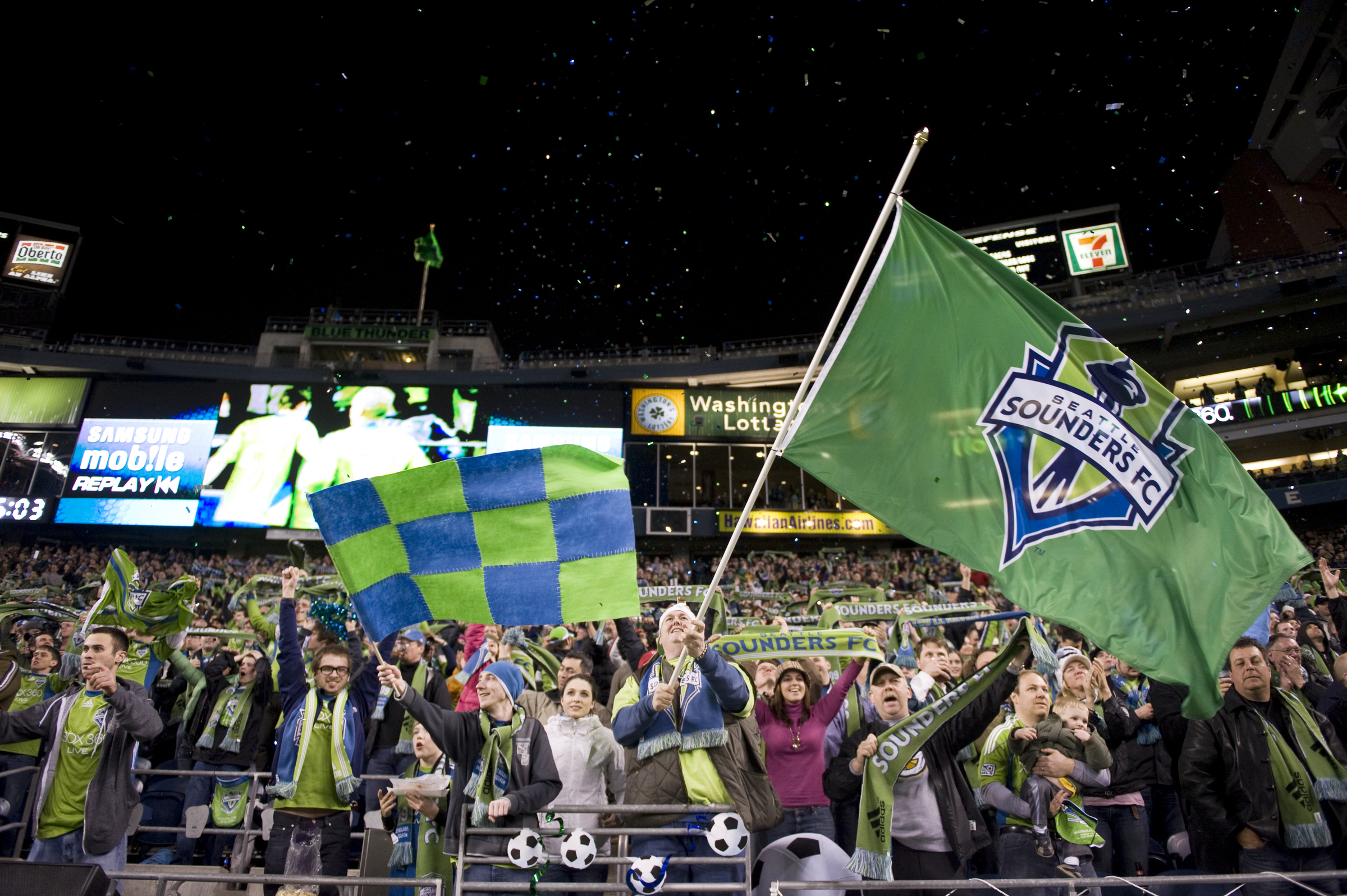 MORE SO THAN most sports, soccer crowds can be divided into two general groups:

There are people who follow the team with varying degrees of passion. They know rosters, stats, and strategy. They attend games, buy concessions and merchandise, take their kids (if applicable) and root for the home team. They don’t necessarily live and die with each result, but they care about their club. Like any other sport we would call these people “fans.”

Then there are people for whom knowing the roster and strategy and attending the games and rooting for the team simply isn’t enough. Perhaps it’s the tribal nature of the sport that brings out this behavior, but for some people anything less than a 100-percent buy-in is considered unacceptable, if not downright callow.

These people differentiate themselves from average fans by singing, chanting, dancing, waving flags, and cheering in an effort so thoroughly organized that the best of these groups become more than fans at a game, they become part of the show. It’s something like a student section at a college football or basketball game; but these folks never lost their enthusiasm for organized cheering. These soccer fans organize themselves into “supporter groups,” and the first and largest of those groups in Seattle are known as the Emerald City Supporters.

Whether home or away, support groups traditionally sit in seats behind the goal in what’s called “The Curve” or in its Italian origin, “Curva.” In most stadiums these seats (or in the case of Reed and his group in San Salvador, concrete platforms) offer little in the way of view, even less in terms of amenities, and zero protection from the elements.

The location does allow for a better atmosphere for the kind of organized chaos that groups like ECS create. Since seats in The Curve are usually the cheapest in the stadium, and because they are traditionally General Admission, they are available and affordable to anyone who wants to join. The only caveat is that you’re expected to participate in the singing and cheering throughout the match, and you probably won’t be as comfortable as those sitting in more posh seats elsewhere in the stadium.

Reed remembers that on the sweltering August night when his group arrived at the Estadio Cuscatlan, the ticket salesman tried his best to show the hardy wayfarers from the Pacific Northwest hospitality.

“For a 10 dollar ticket,” he began, “You can sit right here in the middle about half way up. The best seats in the house!”

Reed thanked him but on behalf of the group, declined the generous offer, and asked to be taken to The Curve. The ticket salesman looked at Reed and shrugged his shoulders.

“OK, Gringo,” he said in a tone that mixed mild surprise with ‘have it your way.’ He motioned that they should follow the armed guards to the terraces.

“Supporters are interested in not being with the suite holders or in the so-called best seats in the house,” Reed explains. “They want to be as far away from that stuff as possible. You want the cheap seats. It’s part of the culture. It’s the punk rock aesthetic of the whole thing.”

The Sounders organization is similar to most North American sports franchises in that most of the key people are not all that into the punk rock aesthetic of anything. But long before they would play an MLS game, the Sounders had to develop a plan to work with the already established ECS. This led to some uneasy moments and tough discussions that happened within both organizations and between the Sounders and the ECS regarding how the supporters group would integrate with the overall fan experience so critical to the success of the team.

From the ECS standpoint, the leaders quickly realized they needed to present a united and professional front. This wasn’t some group of soccer hooligans looking to create trouble. This was an organized group of passionate fans who wanted to sing, dance, cheer, and chant in support of a team they were already in love with. They wanted to do things on their terms, but they approached the Sounders organization with respect and a willingness to listen and compromise where needed. They sought reciprocation from the team.

From the Sounders standpoint the prospect of having a group of hundreds, if not thousands of fans who wanted to support the team at the highest level, but wanted to do so under their own set of rules created a nervousness best explained by CEO Tod Leiweke one spring afternoon prior to a match in 2009. “These guys are like a breakaway Baltic Republic.” 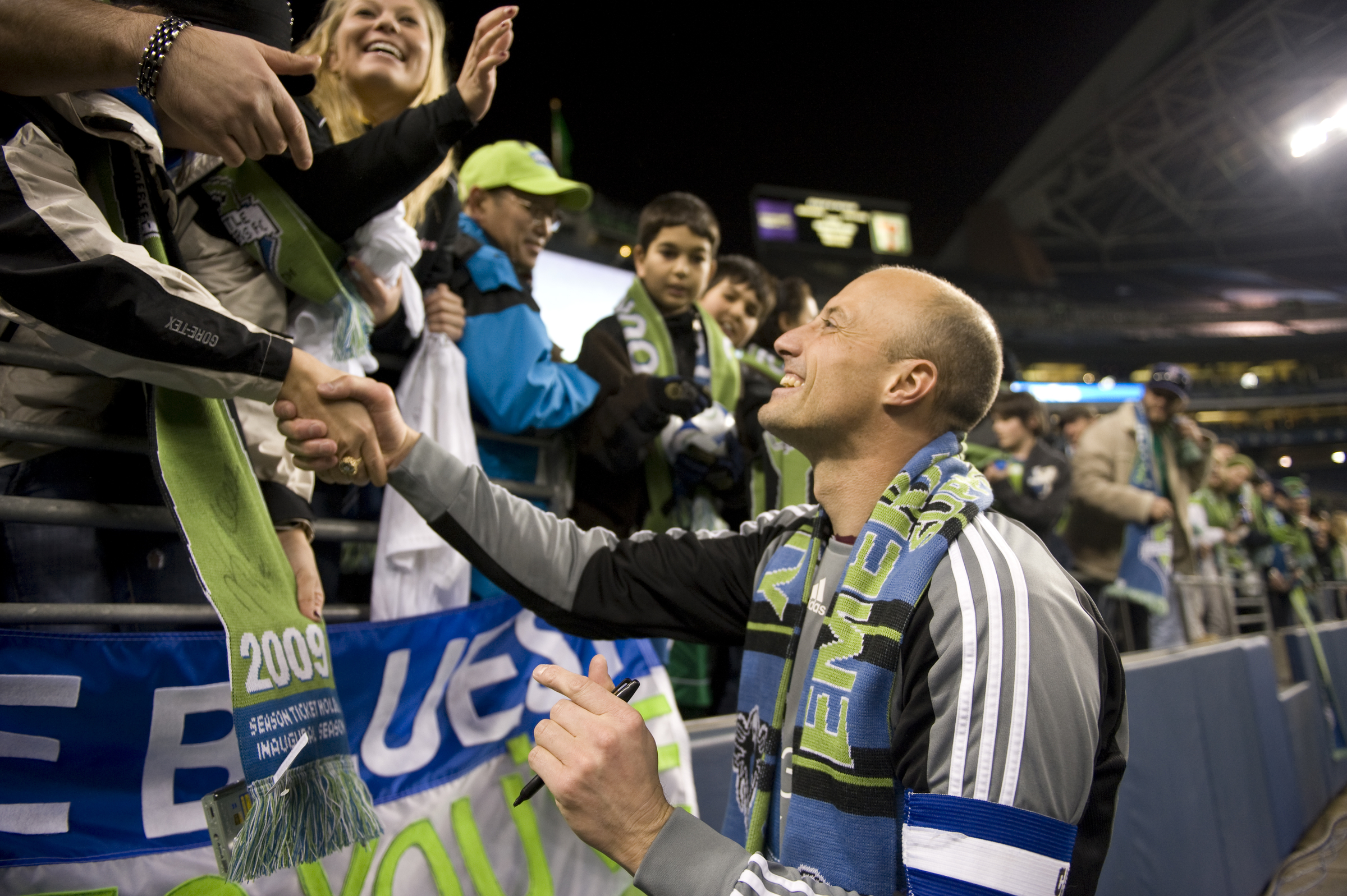