CANUCKS COLLAPSE EPIC BY ANY DEFINITION

CANUCKS COLLAPSE EPIC BY ANY DEFINITION 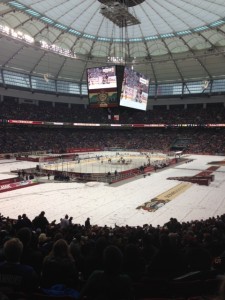 The view from section 251 row KK at Sunday’s Heritage Classic.

The final match up of the NHL’s 2014 Stadium series brought the curtain down on the outdoor games with an ending so thud like it should accompany definition of the word. Colin Greening’s game clinching empty net goal for Ottawa with 1:33 left went unnoticed by many of the Vancouver fans still in attendance. The goal came just moments after the announcement of the winning number in the day’s 50/50 raffle. With a total collected of over $200,000 many fans were scanning their tickets to see if they’d won half the loot when Greening put the final touch on a 4 to 2 Senators win over the Canucks. Frankly, it was more exciting than what they were seeing from the home team on ice…not just in this game but also since the turn of the New Year.

It’s hard to believe that the Canucks went 10-1-2 in the month of December and ended 2013 as the hottest team in the league. Since then they’ve been an abominable 5-14-5 and they’ve scored three or more goals only five times in that stretch.

Compounding matters at Sunday’s game was a hostile crowd of over 54,000 who made it known throughout the game that they disagreed with Coach John Tortorella’s decision to start rookie Eddie Lack in goal instead of veteran Roberto Luongo. Spontaneous chants of “We want Lu” broke out often during the afternoon and to be sure…they weren’t directed at Lack. The fans were directing their venom at Tortorella who has had a miserable first season behind the bench for the team.

(The entire Lack/Luongo/Torts mess is explained quite nicely right here by Cam Cole of the Vancouver Sun.)

Sunday’s game only counts as one game in the standings but with the the huge event being staged at BC Place it feels like a time to pause and consider that seldom has a sports franchise that appeared to have everything in working order come undone quicker than the Canucks.

It’s been less than three years since the Canucks stormed their way into the 2011 finals. They won the first two games and headed to Boston with all the momentum on their side. Then, just minutes into game three, Canucks defenseman Aaron Rome left his feet to deliver a blind-sided cheap shot to Boston’s Nathan Horton. His blow literally knocked Horton out and into a Boston hospital. Rome was tossed out of the game. The Bruins, stunned at first, rebounded to rout Vancouver 8 to 1 and outscore the Canucks 21 to 3 in winning four of the final five games of the series and taking home the Stanley Cup.

As disappointing (and sadly, riot triggering) as it was the Canucks had the look of an organization that was built for long-term success. 2011 was their third straight trip to the playoffs and with all of their key players signed to long-term deals they appeared poised to stay at or near the top of the league. That they followed up 2011 with another President’s Trophy season (awarded to the team with the league’s best record) in 2012 was simply a mirage obscuring an important fact that’s becoming clear in hindsight.

For these players on this team in this organization the wave crested on that June night in 2011. The seconds before Rome collided with Horton was as good as it was going to get for these Canucks. The entire mess rams home another important (and obvious) fact, it is difficult to sustain success in professional sports. Even with all your key people locked up problems come up. Little things become big things, big things become huge problems, and suddenly instead of battling for a title you’ve become Eddie Murphy’s Aunt.  (Language in link NSFW)

The Luongo story is an example of the comical ineptness that can sneak into the management of a franchise.

In 2009 the team signed him to 12-year contract, a deal that sent a clear sign that he was the face of the franchise for the future. Then, since the 2011 finals, they have messed with him bringing in first Cory Schneider and now Lack in an effort to unseat Luongo as the number one net minder. This despite the fact that he’s considered good enough to be included on Canada’s national team, which you might recall, won a second consecutive gold medal last month in the Olympics.

The Canucks are one Chuck Barris shy of being a total gong show right now. Henrik and Daniel Sedin can’t score anymore. That’s not an opinion but a matter of fact. The team’s number one line (the Sedin brothers and Alex Burrows-another mainstay from the 2011 team) has NOT SCORED A GOAL in 2014.

Center Ryan Kesler has apparently waived his no trade clause and is willing to accept a deal that will get him out of Vancouver.

Factor this into the mess, too: the most notable thing Tortorella has done this year (in addition to needlessly fouling his own nest with the Luongo decision) was to attempt to fight the entire Calgary Flames team in between periods during a game in January. For that he was suspended 15 days by the league.

Less than three years after their thrilling run to the Stanley Cup finals the Canucks appear poised to not even make the 2014 playoffs. Maybe that’s for the best. Since game three in Boston in 2011 they are 2 and 12 in post-season games. They’ve become so pedestrian, such an average to below average team, that by the end of the day Sunday, a day that was supposed to be celebration of the game, most fans were looking through their wallets and purses for the winning 50/50 ticket. Whoever had that ticket was a winner and was going home over $100,000 richer.

The rest of the fans went home losers.