Mr. Cub and Mr. Hydro Make Me Smile in Chicago

Mr. Cub and Mr. Hydro Make Me Smile in Chicago

So I’m sitting here in Chicago minding my own business when two things happened involving guys who are both MUCH older than me.

First, on our way into town this afternoon through a series of weird coincidences my wife and I emerged from the subway a little over one mile south of our hotel. We realized this after about a half mile walk with our luggage through downtown in 95 degree weather. We got to the spot we thought was our hotel at about 4pm. Prime heat time. As it dawned on me that there was no hotel in the area I approached a valet guy at a nearby restaurant and asked him about the location of our hotel.

“Oh,” he laughed, “It’s a mile north of here. LOTS of people make that mistake. It happens all the time.”

Great. Our hotel shares its’ name with a restaurant. We had arrived at the restaurant. This development instantly brought out the best and worst of my wife. For a brief moment I was an umpire and she was Lou Piniella.

But her mood quickly changed as she gazed down the street. “Look,” she said, “There’s Haray Caray’s. Let’s go get a beer and re-group.”

Off we staggered into the air conditioned comfort of one of America’s great watering holes. We settled into a table in the crowded bar and ordered two cold beers.

My seat in the bar backed up to a stairway and I noticed a couple guys sitting at the top of the stairs at a private table. A few minutes later I heard the duo coming down the stairs and I knew I would have to scoot my chair over to make way for them to exit. Before I could move my chair I heard a voice from over my left shoulder.

I stood up…moved my chair and looked at the guy who had asked me for room.

It was Ernie Banks. 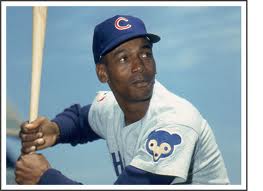 “Hello,” he responded. “I’m Ernie. Is that woman your sister?”

I laughed and introduced him to Renee.

“She’s too pretty to be YOUR wife,” he said. I was floored. This legend, this Hall of Famer, MR CUB was cracking on me. It was one of the greatest moments of my life.

I was walking on air the rest of the day. Then I saw a tweet from long time friend and MASSIVE supporter of the KJR Karesathon Dennis Ameen informing me that KIRO TV had done the RIGHT thing and put Pat O’Day back on the Seafair Hydros Broadcast.

Wow…where did they get THAT idea?

I could not be happier for Pat and I’m proud of KIRO. Admitting you made a mistake isn’t easy but in this case it was the right thing to do.  Brilliant move by everyone involved.

Life throws us all kind of days. Good ones. Bad ones. Great ones.

Today was a great one. In the span of two hours I met Mr. Cub and learned Mr. Hydro is back where he should be: talking on TV about the sport he loves.

Between the two of them Ernie Banks and Pat O’Day have seen 160 years on the good green Earth and neither one is done yet. Ernie is a living legend and a treasure in Chicago. Pat is the exact same in Seattle.

Great decision by the powers that be at KIRO. Thanks for putting our legend right where he should be on race day.